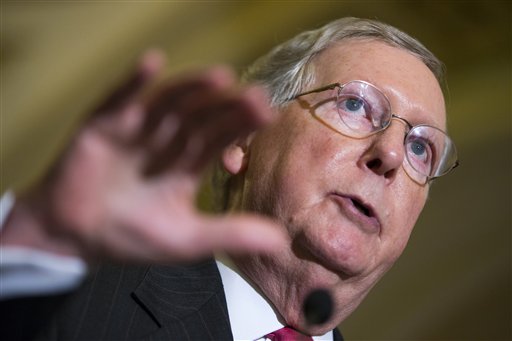 The Kentucky Republican’s memoir “The Long Game” will be released in May, Sentinel told The Associated Press on Monday.

According to the publisher, a conservative imprint of Penguin Random House, McConnell will address “controversial issues” involving himself and both parties, whether tea party Republicans who have accused him of being too willing to compromise or such leading Democrats as President Barack Obama and Senate Minority Leader Harry Reid of Nevada.

McConnell, 73, was first elected to the Senate in 1984 and is regarded as one of Washington’s shrewdest politicians. In a statement issued through Sentinel, he described his book as a defense and “more optimistic view” of the Senate.

“At a moment of widespread anxiety and distrust about our political institutions, I thought it was important for someone who believes in the wisdom and durability of our system to offer a longer, more optimistic view, to share the lessons and experiences that would help others better understand and appreciate the Senate and what happens here behind the scenes from day to day,” he said.

“It’s a unique and indispensable institution. I’d like to help others see why.”

“This will be a candid memoir of Sen. McConnell’s entire life and career, from his childhood battle with polio to the most recent dramas on Capitol Hill,” Sentinel president and publisher Adrian Zackheim said in a statement. “It will fascinate anyone interested in how Washington really works behind closed doors, as well as the power of modesty, patience, and diligence in a field that seems to demand the opposite traits.”