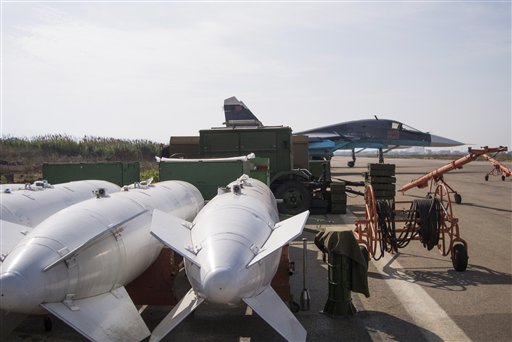 BEIRUT (AP) — When Russian Foreign Minister Sergei Lavrov said his country was ready to aid Syrian rebels fighting the Islamic State group, rebel commanders scoffed, pointing out that Russian aircraft were pounding their bases in central and northern Syria on a daily basis.

Moreover, Lavrov not long ago had ridiculed the main Western-backed rebels known as the Free Syrian Army, calling the group a “phantom structure.”

But some in the Syrian opposition are wondering whether the Russian offer, for all its ambiguity, might be worth seizing in order to test Moscow’s commitment to finding a negotiated solution to the four-year civil war. The seeming change of tune is in sharp contrast to the stance of Syrian President Bashar Assad, who considers all rebels on the ground to be terrorists.

“Maybe there is a disconnect between the regime’s discourse and that of the Russians,” said Munzer Abkik, of the Syrian National Coalition, an opposition group in exile that coordinates with the Free Syrian Army.

“We are watching cautiously in the coming days to see if they are serious about finding a political solution through a real transition of power, or if they are simply maneuvering to gain time,” he said. “The rebel commanders are considering this possibility … If they sit with (Russian officials), they say they can find out if they are bluffing.”

Russia says it has already met with rebel commanders in Moscow, a claim denied by the opposition and their political allies. But some mediators and politicians who coordinate with the Free Syrian Army say the Russians have reached out to the rebels, either to individual commanders on the ground or through mediators.

Lavrov first made the offer last week. On Tuesday, he repeated it, saying, “We would like and would be ready to help not only the Syrian army, but all opposition units confronting terrorists on the ground in Syria.” He said Moscow was reaching out to the United States and countries in the region to help locate moderate and anti-terrorist opposition factions in Syria.

“I would say frankly that it hasn’t been easy to find them, and we are still continuing the search,” Lavrov said.

Retired Lebanese army Gen. Hisham Jaber, who is familiar with the Syrian military, said Russia is looking to show flexibility. “The aim is political … to talk to those in the trenches, not those in hotels,” Jaber said. “Russia can’t talk about a peaceful resolution and hold the Syrian regime card alone.”

Russia is signaling that it is willing to include rebel fighters in any unified Syrian military force to fight terrorism that might emerge from negotiations, Jaber said. But Moscow also wants to underline to the U.S. and its allies how disunited the Free Syrian Army is and how difficult it is to negotiate with them. Still, with 25,000 to 30,000 fighters on the ground who claim affiliation with the Free Syrian Army, Russia knows they are a force to reckon with.

“What is there to lose to throw the test balloon … and give the impression that Russia is here to solve the problem?” Jaber said.

By thrusting itself in the complex Syrian conflict, Russia also stirred a new flurry of diplomacy.

The four powerhouses that have leverage over the conflict — Russia, the U.S., Turkey and Saudi Arabia — have been holding talks over Syria’s future, and on Tuesday U.S. officials said that Iran — like Russia, a major backer of Assad — had been invited to participate for the first time. Few details have emerged, and Iran has yet to reply.

In a sign of possible discord with his Russian allies, Assad’s office issued a statement Tuesday reiterating that he will not consider any political initiatives “until after eradicating terrorism.” The statement was in response to comments by Russian lawmakers who visited Assad on Sunday and said the Syrian leader was willing to hold early presidential elections that he would run in.

A former Free Syrian Army soldier who is now in Turkey and acts as a contact between rebel factions and Russia said a Russian emissary had already reached out to him to arrange meetings with rebel commanders. The go-between, who goes by the nom de guerre Abu Jad, described the emissary as a Russian of Syrian origin, whom he met through a Syrian politician, who in turn had met him in Moscow.

“We didn’t give a decision yet. We are waiting for a confidence-building step,” Abu Jad said. “They have to stop the raids against the FSA.”

Abu Jad said there was no consensus among rebel commanders on whether to take up the offer. But he added that with a new push for diplomacy, the rebels must be prepared for a possible new channel of negotiations. “Wars always end in negotiations … We try to be ready and restore our place so as not to always be dependent on the outside.”

Jamil Saleh, the commander of the CIA-backed rebel faction Tajammu Alezzah, said the group’s bases in central Hama have been pounded by Russian airstrikes every day since the campaign was launched on Sept. 30. Last week, an emissary of the Russians contacted him to arrange for a meeting in a third country. Saleh said he rejected the offer.

“This is an attempt to win over some factions or cause strife among them and with their (foreign) supporters,” Saleh told The Associated Press. “It is a matter of principle, so long as Russia supports the regime and is pounding us and Syrian cities we can’t talk to them. They must first recognize the Syrian revolution and the Free Syrian Army.”