Last Friday, agents referred a 35-year-old male driver of a semi-truck for secondary inspection and discovered four Mexican men, ages 18 through 24, being smuggled in the sleeper portion of the cab.

On Wednesday, agents at the same checkpoint referred a 47-year-old driver of a semi-truck for secondary inspection and discovered a 30-year-old previously deported Mexican national concealed in the cab.

Agents seized both semi-trucks and arrested all subjects. The five Mexican nationals were processed for immigrations violations, while both drivers face federal smuggling charges.

In an effort to prevent fatalities at the hands of smugglers, Department of Homeland Security has recently launched “Operation Safeguard” to educate the public and the trucking industry on the life-threatening dangers involved in using commercial conveyances to smuggle humans. 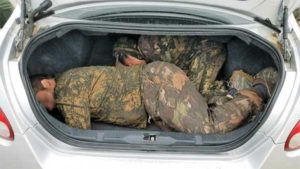 Agents discovered aliens in the trunk of a vehicle that was along the highway west of Tucson.

Wednesday morning, Sonoita Station agents extricated a U.S. citizen driver and passenger, along with two Mexican nationals, from an Infinity Q50 after the driver fled from agents and crashed into a culvert on State Route 83. Agents discovered an additional Mexican and Honduran national locked in the vehicle’s trunk. All of the occupants were transported to a local hospital for evaluation.

A couple hours later, agents from the Tucson Station stopped a Honda Civic and a Nissan Maxima on Highway 286. During the immigration inspection of the occupants, agents determined the U.S. citizen drivers from both vehicles were each smuggling a Mexican and Guatemalan national in the trunks of their vehicles.

Late that afternoon, agents working at the Nogales Border Patrol Immigration Checkpoint, discovered a Mexican and Guatemalan national smuggled in the trunk of a Chrysler 200.

The U.S. citizen drivers were arrested and charged for alien smuggling. The ten illegal aliens, ranging in age from 17 to 40, were processed for immigration violations.