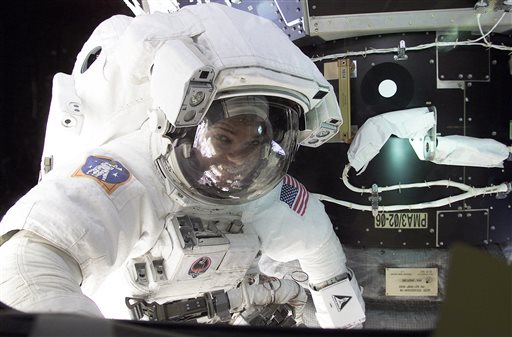 NEW YORK (AP) — Lunch with former astronauts Robert Curbeam, Jerry Linenger and Yi So-yeon feels a little like eavesdropping on the meeting of a special club.

Bring up the reason they’re together — to discuss the near misses that have them featured on the Science Channel’s upcoming series “Secret Space Escapes” — and the club would seem even more exclusive. But not as much as you’d think, since the danger of space travel probably isn’t fully appreciated by the general public.

For many reasons, incidents are often minimized at the time. Space agencies don’t want the bad publicity, no one wants to scare families back home and astronauts are trained to fix problems and move on.

“Whenever you’re operating on the edge of human ability, you’re going to have close calls,” Linenger said. “We’ve had quite a few. But because we usually come out of them successfully people say that it’s fine when it’s actually quite hairy.”

Linenger’s close call, part of the series that premieres Nov. 10 at 10 p.m. EST, came when he and the other five men onboard had to put out a fire on the Russian space station Mir in 1997. Russian press reports at the time dismissed it as akin to a cigarette burning; in reality it was like a sparking blowtorch so hot it melted metal. There aren’t many places to escape a serious fire on a spaceship.

Most astronauts are at peace with the danger they face, they say, believing the importance of the missions makes the risk worth it.

Curbeam was on a spacewalk in 2001 when a valve leaked, spilling toxic ammonia flakes all over his spacesuit. He had to fix the leak, then stay outside the International Space Station for two extra orbits around the Earth, waiting for the sun to melt away the ammonia crystals. He was protected by his space suit, but exposure to the ammonia would have put his colleagues at risk if he couldn’t clean himself off.

During the incident, Curbeam said he put aside negative thoughts to get to work.

To a certain extent, the survival skills give the astronaut a certain cache, as Yi found out. As a young scientist, she became the first South Korean in space when she flew on the space station in 2008. She was a national hero back home, but the Russians she flew and trained with didn’t warm to a young Korean woman joining their club. She was just 29 at the time.

Her problems came during re-entry, when a malfunction briefly subjected her and crewmates to eight times the force of gravity. The simple act of pushing her chest up and down to breathe became difficult.

Back on Earth, a conservative Russian military officer, his uniform bedecked with medals, knocked on her door and wanted to hear her story.

“He accepted me as one of his colleagues after the accident,” she said. “I thought, ‘that’s good, as long as I survived.'”

She’s never told her mother much about the incident, however, particularly after hearing that mom fainted in fear while witnessing her takeoff.

Curbeam’s family watched his space walks back home and, naturally, were nervous.

“I’ve always told my mother that I’m one of the few persons on Earth where there are literally thousands of people looking out for my safety every time I go to work,” he said.

The former astronauts all still support the space program, and bristle when confronted with people who wonder whether it’s worth the expense. They saw the chance to tell their stories as a way of helping the program.

Set aside the dangerous incidents, and their stories of space travel will bring out the excited kid in anyone. They remember staring out the windows of their vehicles in wonder at all that passed by, the unexpected colors and vast amounts of non-twinkling stars. Photos of Earth from space are always lovely; imagine seeing it in real time, with cloud formations swirling above the surface.

“Everybody tells you it’s so captivating, that it’s 100 times better than anything you’ve ever seen,” Curbeam said. “They’re wrong. It’s much better than that.”

Follow David Bauder at twitter.com/dbauder. His work can be found at http://bigstory.ap.org/content/david-bauder