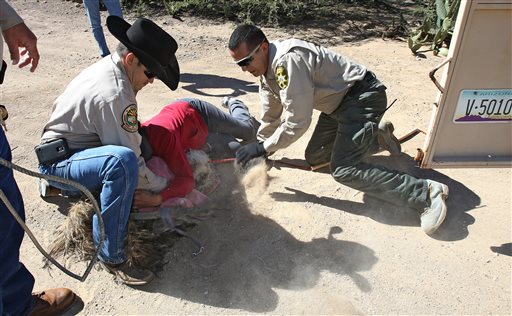 CORRECTS DATE TO THURSDAY NOV. 5, NOT TUESDAY NOV. 3 - In a Thursday, Nov. 5, 2015 photo, Arizona Department of Agriculture officer Jake Woehlecke, left, and Pima County Sheriff Deputy Rod Calkins, right, help Carlitta Burrell, middle, as she wrestles with an escaped emu near South Cardinal and West Irvington Road in Tucson, Ariz. The animals belong to Burrell's uncle. The emu was one of four that escaped from a nearby home. All were rescued and returned to the owner. (A.E. Araiza/ Arizona Daily Star via AP)

TUCSON, Ariz. (AP) — Pima County authorities say four emus that got loose in a neighborhood on Tucson’s southwest side have been captured.

The four large birds were contained Thursday in the area of West Drexel Boulevard and South Cardinal Avenue.

County sheriff’s officials say two of the emus have been returned to their owner and are back in their pen.

They say the other two emus are being taken back to their owner in a horse trailer.

The emu is the largest bird native to Australia and the second-largest bird in the world, behind the ostrich.

In February, two quick-footed llamas dashed in and out of traffic in a Phoenix-area retirement community before they were captured by authorities, causing a stir in the streets and on social media.