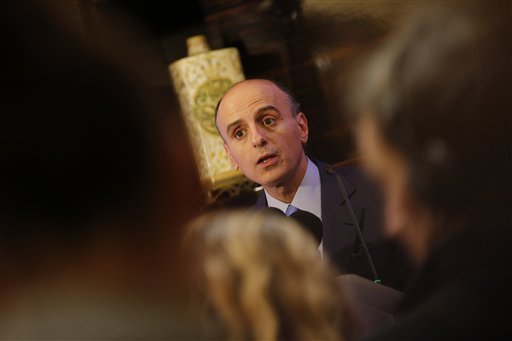 Saudi Arabia's foreign minister Adel bin Ahmed Al-Jubeir holds a press conference Tuesday, Dec. 15, 2015 in Paris. Saudi Arabia said Tuesday that 34 nations have agreed to form a new "Islamic military alliance" to fight terrorism with a joint operations center based in the kingdom, but the coalition does not include Shiite-majority Iran or Iraq, and its not clear how exactly it would function. (AP Photo/Christophe Ena)

RIYADH, Saudi Arabia (AP) — Projecting its ambition for regional leadership, Saudi Arabia said Tuesday it has lined up most of the Arab world, NATO member Turkey and several African and Asian countries behind a vaguely defined “Islamic military alliance” against terrorists.

The move allows the kingdom, which follows a deeply conservative interpretation of Islam, to cast itself as a leader in the fight against extremism.

But absent from the alliance are the Shiite-led countries of Iran and Iraq, as well as Syria, whose government is backed by Tehran. And that omission raises questions about whether the 34-member bloc is primarily intended to present a unified front against extremists — or to also serve as a Sunni deterrent to Iran, Saudi Arabia’s main regional rival.

Riyadh supports rebels fighting to overthrow Syrian President Bashar Assad and has been leading an Arab coalition against Iran-supported Shiite Houthi rebels in Yemen since March. It is also part of the U.S.-led coalition fighting Islamic State militants in Syria and Iraq.

The announcement on state media said the Saudi-led alliance is being established because terrorism “should be fought by all means.”

Deputy Crown Prince and Defense Minister Mohammed bin Salman said at a rare news conference that the bloc will develop mechanisms for working with other countries and international bodies to support counterterrorism efforts. Their efforts would not be limited to countering the Islamic State group, he added.

“Currently, every Muslim country is fighting terrorism individually … so coordinating efforts is very important,” he said.

Though few details were given, the statement said the alliance would not just be countering Sunni extremists but protecting Muslim nations from all terrorists “whatever their doctrine.”

When asked if this meant the alliance would also counter Shiite militants, the Saudi defense minister replied the coalition would fight terrorist groups “regardless of their categorization,” particularly in Syria and Iraq, where he said there will be cooperation with the international community.

The U.S. and its allies have trained militarily with the Gulf states and other friendly countries in the region for years, encouraging them to work more closely together.

Last year, Saudi Arabia and other Gulf states joined the U.S. in carrying out airstrikes in Syria against the Islamic State, also known as ISIS and ISIL. Many of the Arab countries in the new Saudi-led coalition are part of that existing alliance against IS, though their contributions have waned since March, with Gulf efforts diverted to the Yemen offensive.

The Saudi endeavor appeared to catch some in Washington off-guard. A senior defense official said the U.S. did not know in advance about the plan for the alliance and that officials were working to find out details. The official was not authorized to discuss the matter publicly and spoke on condition of anonymity.

U.S. Defense Secretary Ash Carter, visiting Incerlik Air Base in Turkey, said: “In general, at least, it appears that it’s very much aligned with something that we’ve been urging for quite some time, which is greater involvement in the campaign to combat ISIL by Sunni Arab countries.”

White House spokesman Josh Earnest said the alliance wouldn’t be a substitute or a replacement for the U.S.-led coalition fighting IS militants, noting the Saudi effort was intended to focus on broader targets. The Saudis have made “important contributions” to the anti-IS coalition led by Washington, “and we anticipate that they will continue to do so,” he said.

Saudi Foreign Minister Adel al-Jubeir said in Paris that members could ask for assistance from the coalition, which would address the requests “on a case-by-case basis.” He did not rule out the deployment of ground troops.

The new coalition includes nations with large and established armies such as Pakistan, Turkey and Egypt, as well as war-torn countries like Libya and Yemen. African nations that have suffered militant attacks, such as Mali, Chad, Somalia and Nigeria, also are members.

Prime Minister Ahmet Davutoglu of Turkey, the only NATO member in the coalition, called it the “best response to those who are trying to associate terror and Islam.”

Hisham Jaber, a retired Lebanese general who heads the Middle East Center for Studies and Political Research in Beirut, called the new bloc “necessary, but not enough.”

“Saudi Arabia has enough power, has enough money, to stop those imams or religious (clerics) who are every day encouraging extremists,” he said.

Mustafa Alani, the director of the security and defense department at the Gulf Research Center in Geneva, said new counterterrorism strategies, including standing ground forces, are required to confront the changing threat posed by groups such as IS, which is intent on state-building rather than singular attacks.

“The Saudis … hesitate to go under the U.S. umbrella. But here is another umbrella,” he said. “They want to say it’s ‘good Muslims fighting bad Muslims.'”

Alani acknowledged there are “a lot of difficulties on the technical side” to making such a military coalition work, adding it will need support from the wider international community. But if successful, he said, it could help fill a much-needed gap in the fight against IS.

“Islam is accused — directly or indirectly — of sponsoring terrorism. Everyone has to prove not guilty,” he said. “This project is going to offer Muslim boots on the ground. This is what the West wants.”

Jihadis on a popular IS-affiliated website quickly mocked the alliance, with one suggesting it was a U.S.-inspired project.

Saudi Arabia already is taking the lead in the conflict in Yemen, heading an Arab alliance that is fighting on the side of the internationally recognized government against Iranian-backed rebels and supporters in the army of the country’s former president.

The Saudi military involvement in Yemen began nearly nine months ago, framed domestically as a war to head off Iran. The kingdom has committed a limited number of ground troops, reflecting a measure of caution and the difficult terrain in the impoverished nation, where both al-Qaida and IS militants are active. The new bloc could allow the Saudis to lure some of the countries in the alliance to deploy troops in the conflict, should a cease-fire now in place prove temporary.

Missing is Saudi neighbor Oman, which in recent years has maintained a neutral role and has emerged as a mediator in regional conflicts, serving as a conduit from the Gulf Arabs to Iran.

The formation of the alliance appears to be a de facto cancellation of implementing an Egyptian-sponsored Arab summit resolution from March to create an Arab rapid deployment force. Egypt, Saudi Arabia and the United Arab Emirates were seen as providing the majority of that contingent’s manpower and funding. The deadline for creating that force expired in September.

Saudi Arabia’s generous support to Egypt has been somewhat curtailed under new monarch King Salman, whose foreign policy goals are partly at odds with Cairo’s. However, on Tuesday the kingdom announced new aid in the form of oil and $8 billion in additional investments in Egypt.

Both nations have sharply different perceptions of who poses the biggest threat to their security and also don’t agree on Syria. Riyadh sees Assad’s removal as essential to ending the civil war, while Cairo sees that as a recipe for chaos and bloodshed in which militancy would dominate.