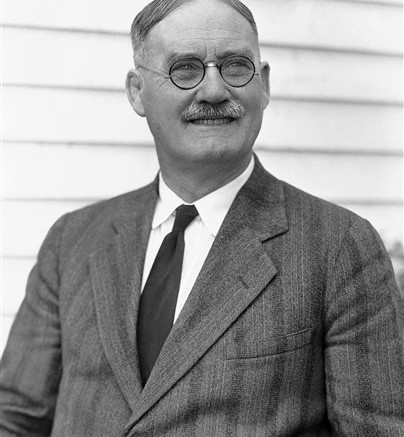 FILE - This is a 1939 file photo showing Dr. James Naismith, in Lawrence, Kansas. A University of Kansas researcher has uncovered an audio recording of basketball inventor James Naismith talking about setting up the first game in 1891 in Massachusetts. The school says the discovery is believed to be the only known recording of Naismith. (AP Photo/File)

LAWRENCE, Kan. (AP) — A University of Kansas researcher has discovered what is believed to be the only audio recording of basketball inventor James Naismith, during which he describes the first game he organized 124 years ago this month as a bit of a disaster.

Michael J. Zogry, an associate professor of religious studies, obtained the nearly 3-minute audio in November from the Library of Congress. It was part of a radio show from New York station WOR-AM called “We the People.” During the Jan. 31, 1939, program, Naismith explained how he set up the game with two peach baskets at the International YMCA Training School in Springfield, Massachusetts, in December 1891.

Naismith said he had been given two weeks to devise a new indoor activity for his gym class. The work was hurried along by what he described as a “real New England blizzard” that had the youngsters climbing the walls with little to do.

“We tried everything to keep them quiet,” Naismith said on the recording, but the students were bored with a “modified” form of football tried in the gym. Naismith figured it was time to try his new idea using an “old soccer ball” and two teams of nine players each.

“I told them the idea was to throw the ball into the opposing team’s peach basket,” he said. “I blew a whistle and the first game of basketball began.”

It didn’t go smoothly. Naismith said the players almost immediately started tackling each other — and worse. Two young men suffered black eyes while another was knocked out, and he had to pull players apart, he said.

“I didn’t have enough (rules), and that’s where I made my big mistake,” Naismith said.

Naismith’s description of the roughhousing sheds new light on the creative process that led him to draft the 13 original rules of the game, Zogry said Tuesday.

“The recording suggests the gym was a laboratory for developing the game and establishing the rules,” Zogry said. “There’s also value in just hearing his voice. In this day and age of media saturation, to find something like this is surprising. No one’s heard his voice in over 75 years. When we hear him talking, we get a sense of his demeanor and his self-effacing attitude.”

Naismith’s grandson, Jim Naismith, first heard his grandfather’s voice once Zogry obtained the audio. He said the recording “changes just about everything that’s been written about that first game.”

“When he turned those 18 guys loose, obviously they were having a good time, but obviously this was kind of try number one. He commented and said he didn’t write enough rules. It came out of that experience,” Jim Naismith said in a university news release. “That makes a lot of sense.”

Rob Rains, the author of “James Naismith: The Man Who Invented Basketball,” co-written with Naismith’s granddaughter Hellen Carpenter, said he didn’t know any other audio recording of Naismith. He said the recording suggests that the game “was modified much more quickly than we first thought.”

The University of Kansas, where Naismith worked for 40 years and was the first basketball coach, has obtained the 13 original rules and is building a structure to house them

Link to the audio: http://exhibits.lib.ku.edu/exhibits/show/naismith150/collections/radio-interview