Tom Kuyper has been around basketball his whole life. Many may remember him as a player for Arizona State University and more recently as a color analyst for ASU games on TV. What you may not know is that he is the Head Basketball Coach at Southwestern Assemblies of God University Arizona Indian College. SAGU, for short.

SAGU  is a Division 2 school competing in the National Christian College Athletic Association.

Coach Kuyper has created a small school native All-Star team at SAGU. He signed 14 small school Native Americans from around Arizona, most of them from 1A-3A. Those players are:

“We have a chance to redefine Rez Ball at the collegiate level,” said Coach Kuyper. “You’ve never really seen a college team try to run and gun like these guys are used to in high school, it will be Rez Ball 2.0.” 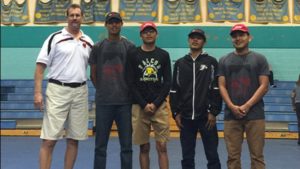 Coach Kuyper with the four Alchesay Falcons he signed.

SAGU spent most of last season ranked in the Top 10 and with this new group of players, they hope to be in the Top 5 and make a push to the National Championship.

Despite not having a conference opponent in Arizona, the Warriors will play plenty of games in the state. They will play all of the NAIA schools, including Arizona Christian, Ottawa University, Benedictine University and Embry-Riddle University.

If this team gets the type of support they got at the high school level, you better start lining up now if you plan on getting in the gym.