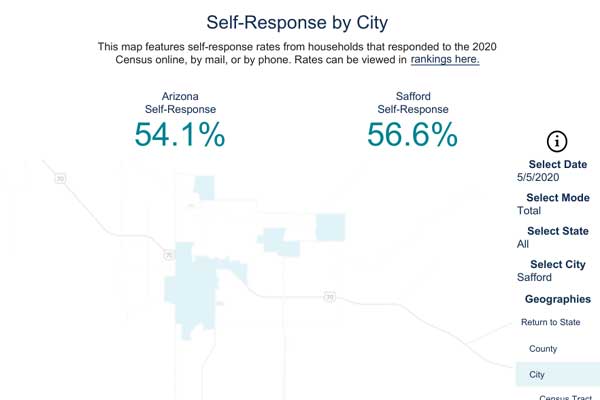 THATCHER —Arizona is 33rd in the nation when it comes to responding to the U.S. Census.

That’s according to data released by the U.S. Census Bureau on Monday.

With 54.1 percent of the households responding, Arizona ranks behind Florida at 55.1 percent and just ahead of Georgia at 53.6 percent.

The Midwest has the best-responding states, with Minnesota leading the way at 67.8 percent, followed by Wisconsin at 65.2 percent, Iowa at 64.8 percent, Nebraska at 64.3 percent and Michigan at 64 percent.

At the county level, Graham is at 43.7 percent response thus far, lagging about 5 points behind the county’s final response rate in 2010.

At the city and town level in Graham County, Pima has a 27.6 percent response rate, Safford is better than the state at 56.6 percent and Thatcher is at 52.2 percent.

In Greenlee County, Clifton has a 19 percent response rate while Duncan is at 20.4 percent.