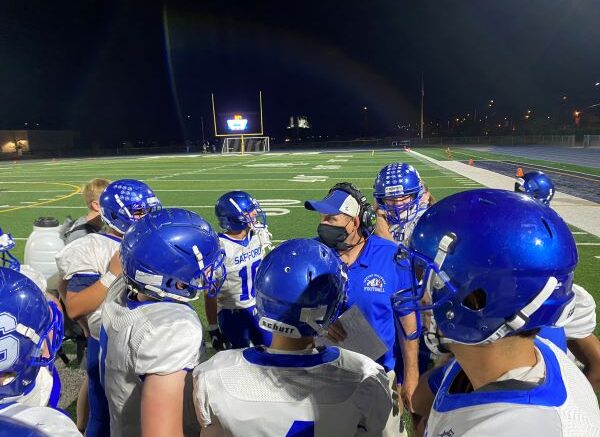 Gilbert, AZ –With his back foot grazing the turf just inches outside of his own goal line, senior runningback CJ Scrivner received the second half kickoff. As the speedster zigzagged through American Leadership Academy Gilbert North defenders, it became clear:Scrivner would be in for six.

That haymaker proved to be the only punch the No. 13 Safford Bulldogs would land on Friday night in Gilbert, falling 35-8 to the No. 4 seed of AIA’s 2020 3A Conference Play-In.

Down 21-0 at half, Safford head coach John O’Mera made sure his team wouldn’t quit. Telling his team at the half, “let’s try to get back into it. We have to cut away slowly but surely.”

On the ensuing drive following the Scrivner return touchdown, junior linebacker Christian Smith intercepted Eagles’ senior quarterback Jack Ricedorff for the second time of the night, setting up the Bulldogs at the opponent’s 42.

“(Ricedorff) is a stud quarterback,” Smith said.“He is going to give people problems in the playoffs. I noticed; he’s barely threw it to the flat. When he did, it wasn’t enough for me to reach them. That’s when I started backing up more and started to read his eyes a little bit better and picked him off twice.”

After Safford (4-3) was unable to do anything with the field position, perhaps the finishing blow was given by ALAGN (7-1). Two plays into the drive, junior runningback Easton Webster took a handoff 51 yards to the promised land for one of three touchdowns he would have on the night, his second rushing. The score put the Eagles up 28-8.

The Bulldogs looked like they may have had some fight left in them, as senior safety Noah Bevens intercepted a Ricedorff pass at the Eagle 34. The wind was let out of the sails almost immediately, as Eagles’ senior safety Luke Hall brought in an interception of his own in the redzone.

The pick started the final scoring drive of the night for either team, as Ricedorff decided to keep it himself and run in for a 17-yard score, putting ALA-GN up 35-8. Ricedorff finished with 267 yards passing, 35 yards rushing and the three interceptions.

Other stat leaders for the Eagles included Webster with 170 yards rushing and three total touchdowns and junior wide receiver Johnny Bellino with four catches for 106 yards.

On Safford’s end, the Bulldogs finished with 148 yards rushing, 66 of them coming from Bevens. Following his final high school game, Bevens reflected on his Bulldog career.

While the loss brought an end to Safford’s 2020 season, O’Mera remained positive and eager to begin preparations for the 2021 campaign.

“We fought. That’s something to build on,” O’Mera said.“It was a great year, we just ran into a team that was hitting on all cylinders.That is something this team has done, is fought every day, from day one. What an honor to get into the playoffs and have a chance to come play a class program like (ALA-GN). Now we have to go back and wish our seniors best of luck and go to work and build for next year.”

ALA-GN will move on to the quarterfinals of the 2020 AIA 3A State Championship against Round Valley on Friday, November 27 at 7 p.m.