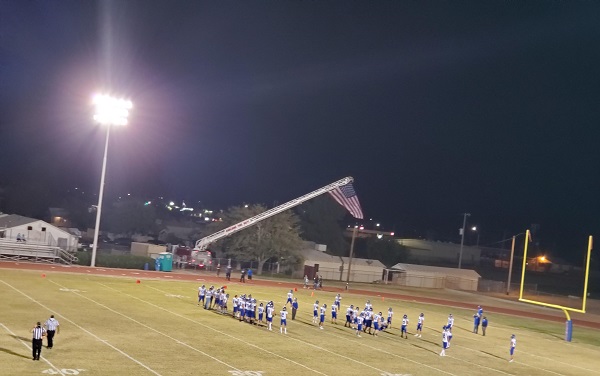 The Coolidge Fire Department displays Old Glory over the field as Safford warms up Friday night. Photo by Lee Patterson

COOLIDGE — Safford needed a late interception by Noah Bevens to seal the 24-21 win over Coolidge on Friday night.

Safford Head Coach John O’Mera said after the game that “ugly wins still count as wins.” His team fumbled the ball 5 times and threw one interception but were able to get timely first downs on offense and big stops on defense in the 4th quarter.

The Bears focused on stopping leading rusher Christian Smith with 7 in the box. He only had 3 carries in the first half. The Bulldogs only rushed for 26 yards as well in the first half. That opened up some passing lanes though for Safford who had 103 yards passing at halftime including a 35 yard touchdown from Bevens to Jejdrique Chavez to give Safford an early 7-0 lead.

Coolidge answered back with 4 minutes to play in the first half with a one yard touchdown run by quarterback Jacob Gunter. The Bears were set up with a first and goal from their 5 yard line after forcing a Bulldog fumble.

Both teams traded punts and turnovers for most of the 2nd quarter but Safford was able to get into field goal range and Nathan Macario hit a 37 yard field goal with :25 seconds remaining in the half to give the ‘Dogs a 10-7 halftime lead.

Coolidge took their only lead of the game 14-10 at the ten minute mark of the third quarter on a Greg Rodriguez 5 yard score.

Safford’s run game opened up in the 2nd half and Smith was able to get loose on two touchdown runs. One from 8 yards and the other from 26 yards out. He would finish the night with 57 yards.

The Bears made it interesting with 4:35 to go in the game when Gunter found Augie Chiang on a screen pass for a 50 yard score to tighten the game 24-21. The Bears would have one more chance late in the game but the Bevens interception with :23 seconds to go secured the win for Safford.

The Bulldogs move to 3-1 and still control their own destiny for the playoffs. The Thatcher Eagles actually helped the ‘Dogs with their win over Florence. If both the Eagles and Bulldogs win next week, the winner of their meeting on November 13th will qualify for the playoffs.

Safford will travel to Florence on Friday for a 7pm kickoff.