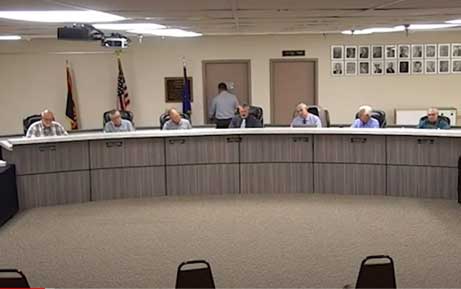 SAFFORD — The Safford City Council had its first public hearing Monday on the Fiscal Year 2021-22 property tax levy, and the levy staying same as the previous year.

But even with a policy of holding the line, the city will see a slight increase in taxes collected. Due to increases in home valuations, the city will collect $9.914 more than the previous year.

City Councilman Gene Seale said he wants the public to understand that the city did not raise taxes.

“The confusing part is when people say if we hadn’t done this, you would have paid $49 something, but you’re going to pay $51. But, in fact, we didn’t change anything,” Seale said.

The final adoption of the tax levy will take place June 28 at 6 p.m.

Following the public hearing on the tax levy, the council voted unanimously to adopt the final budget for FY22 at $81,027,139 in expenditures, which includes $8 million in contingency and $1.14 million for parks and recreation.

The general fund will account for $28.2 million, $3.9 million in the special revenue fund, $15.9 in the debt service fund, $24.6 million for the capital improvements fund, $25,000 for the permanent fund and $102.1 million available in enterprise funds, for $174.9 million available in total financial resources.