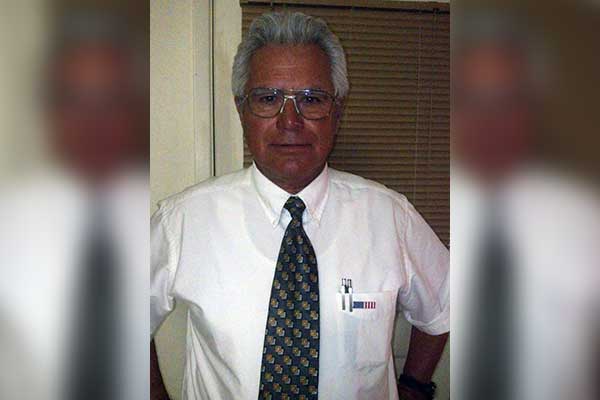 Safford City Councilman, Arnold Lopez, is running for his third term on the council. Lopez was appointed to the council in 2012 to fill the term of Danny Smith who had resigned to run for the Graham County Board of Supervisors. Lopez served three years of Smith’s term before being elected in 2014 to his first full term in office.

Arnold Lopez is passionate about utilities. Having worked as a journeyman high voltage electrician for 45 years, Lopez has dealt with utilities for most of his adult life. When the Council had the opportunity to appoint someone to fill the vacated seat his experience as an electrician was viewed as valuable knowledge for the city Council in 2012. 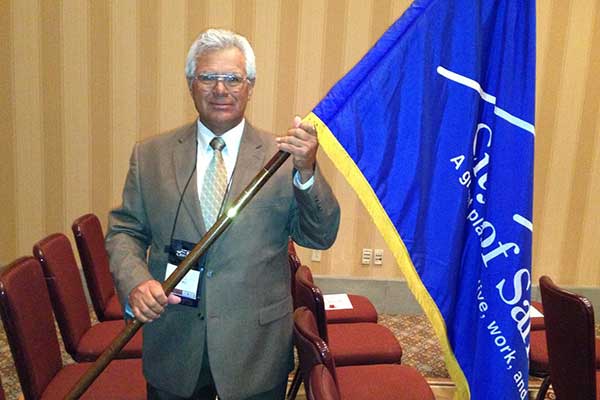 The city of Safford is unique in the state of Arizona, being one in less than 5 cities to own and operate Electric and Gas Enterprise funds in addition to the other traditional utilities like Water and Sewer; landfill and Sanitation services.   Lopez also points out that Safford has the best volunteer fire department in the state, serving the community for over 100 years. The city also owns the municipal airport. Lopez says the council is responsible for these entities. “There’s no power in the position,” he says, “Just responsibility.”

Managing the city’s money is another thing Lopez is passionate about. He says the city is in good shape financially. “For a while, the city was basically running check to check,” Lopez says. “Now there is enough money in reserves so that if we do have another recession like we had in 2008, we can weather it a lot better than we did 10 years ago. Right now, most funds carry between three to nine months of operating reserves in our Fund Balance.” Lopez says he would like to see those balances higher, he would like all funds to have at least six months and a comfortable position would be one full year in reserves.

Having cash in reserve helps the city qualify for grant money and helps with its credit rating. This reserve also qualifies the city for lower interest rates on loans they apply for to build utility infrastructure. The monies that go over the reserve fund balance are used for pay-as-you-go construction projects and maintain the lowest utility rates possible. In order to qualify for certain grants, the city has to have money available to match the funds of the grant.  A strong cash reserve also allows the city to quickly respond to matching grant opportunities.

Lopez says that the council is currently working on a $70 million budget. $56 million of the budget is allocated to capital improvement projects. It may be five years from now before they finally get into effect, but the plans are in place and the money has been secured, thanks to the handling of the money available.

“We’ve gotten in a position where we have money available for the water department,” Lopez says. “We have 78 miles of infrastructure that needs to be improved.”

Lopez has also proposed that the city use effluent water for the county fairgrounds to water the soccer and baseball fields.

“Some people may think that we’re wasting money trying to get the effluent water to the Fairgrounds,” he says. “But if we can get that done we would reduce our water demand by over 120 million gallons each year or 10 million gallons each month, enough to supply about 900 residential customers.”

Lopez has also proposed extending El Paso Boulevard to 20th avenue for a quicker route for ambulances to take to the hospital and provide better access for emergency vehicles.

Lopez says that the current council works well together. “I feel this council is working together well,” he says. “We don’t always agree. The disagreement helps us challenge one another, expand the discussion and come up with solutions. Once a decision has been reached, we support each other and try to help each other.”

“There’s so many things on our plate now that go into the future, and of course, when we approach these things we try to make sure we’re not tying the hands of any future councils or staff, because when we do try to put something in place, we often say that we want to re-hear it again in a year because we want to make sure it can be tweaked or whatever.” “I believe in a process of continued improvement and to achieve that we must review prior actions to learn from our experience.”

Lopez feels that the Safford City Council also has a good working relationship with other governmental entities in the area. “Today, the relationship between Safford, Pima, Thatcher and the county is better than it’s ever been,” Lopez says. “Our staff and managers get along really well, and we’re working together on many things.”

One of the recent joint ventures between the communities was to combine the municipal courts of Pima, Thatcher and Safford into one. This was done to consolidate the system, simplify things and save money.

With the election coming up, Lopez says that every vote counts. “Some people watch TV and think their vote doesn’t count,” he says. “But locally, every vote does count. We could be separated in a race by only six votes. We need every citizen to please vote.”

The Safford City Council election will be decided on August 28, 2018. 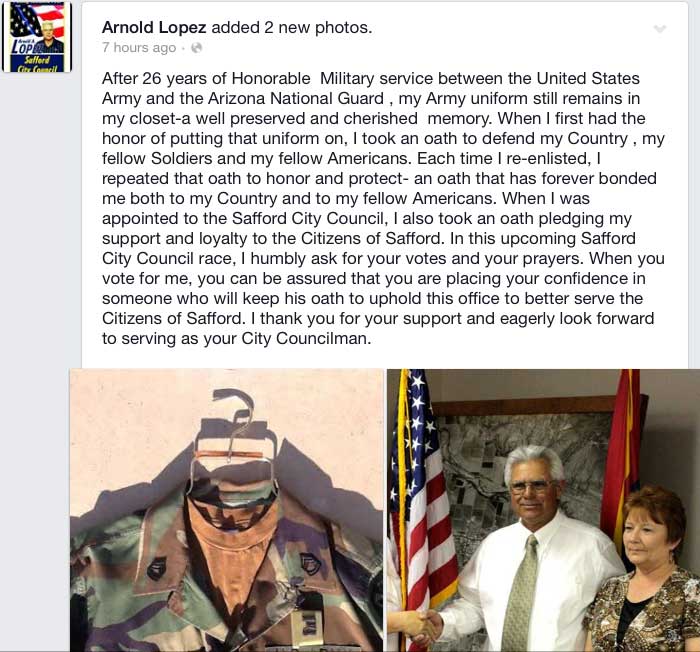