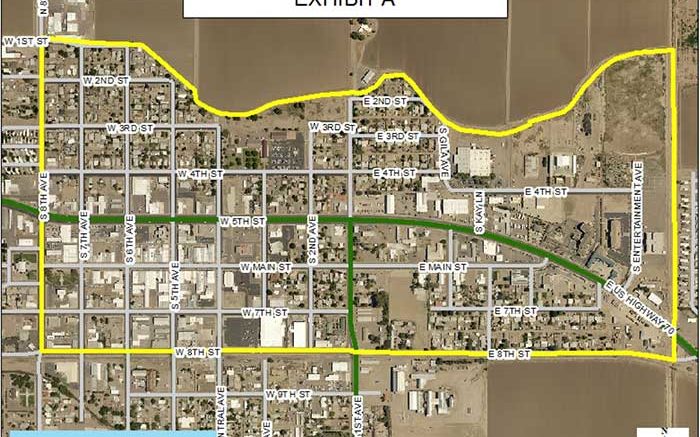 The Safford City Council voted to approve the creation of an entertainment district in the downtown area at their monthly meeting Monday night. The resolution creating an entertainment district allows the mayor and council to approve, on a case-by-case basis, exemptions from the distance restrictions in Arizona liquor laws that pertain to certain types of liquor license permits with a location within 300 feet of a church or school.

In 2010, the Arizona State Legislature approved a new law that allows cities to designate an “entertainment district.” This legislation was created to provide relief from certain liquor license requirements for properties located in areas with entertainment, artistic and cultural venues such as music halls, concert facilities, theaters, museums, studios, galleries, restaurants, bars and other related facilities.

Currently, properties located within 300 feet of a church or a public or private K-12 school can not obtain a new liquor license unless the establishment is a restaurant that generates 40% of revenue from the sale of food, or is a hotel/motel with a restaurant, or is a special event or festival, or is a not-for-profit performing arts theatre with 250 or more seats. In an entertainment district, City Council, on a case by case basis, can request the Arizona Department of Liquor Licenses and Control approve an exemption from the distance requirements mentioned above. The Arizona Department of Liquor Licenses and Control has the final authority to approve or deny liquor license requests.

The council has been considering the idea for some time. In June, a survey was developed and sent to all property owners and business owners within the Safford Downtown Association area. A survey link was also posted online. A total of 243 responses were received by the deadline of July 7, 2019. Of those responses, 190 were in favor of an entertainment district, 28 were in favor but felt there should be limits and 25 were opposed.

At the July 22, 2019 City Council meeting/workshop, the city council was given an overview of the survey, including church contacts and survey results. The consensus of the council was to direct city staff to proceed with creating an entertainment district to include a resolution with an opportunity for the council to receive public comments.

The Safford Downtown Association and the Graham County Chamber of Commerce submitted letters to the council in support of the entertainment district. In expressing support for the district, the letter from the Safford Downtown Association pointed out the diverse mix of business and services in the downtown area. “As we work to encourage and build downtown every day we need all the tools available to make this happen.” The letter pointed out that a business wanting serve alcohol would be prohibited to locate in much of the Safford downtown area because of current restrictions.

The letter from the Graham County Chamber of Commerce said, in part, “The proposed entertainment district allows for multiple uses of our Historic Main Street and Downtown, including worship, commerce, service , and excellent food. The customers, musicians, artists, restaurateurs, and actors of Safford and our wider region have an appetite for a designated space for entertainment. With the historic Safford Theater set to open next year, the founding of the Cochise Graham Wine Council, and more people moving here for work, we believe the time is right to make this type of designated entertainment space a reality.”

Most of the comments at the council meeting on Monday night were in support of the resolution. One of the comments during the meeting pointed out the district boundaries took in a residential area near the Catholic Church and near 8th Street and asked the council to consider narrowing the district down to the business areas to avoid encroaching on residential neighborhoods. After a brief discussion regarding the matter, the council determined that the boundaries could be modified at a later date.

The creation of the entertainment district does not open to door to anyone wanting to serve alcohol. The council will consider each application individually. Applications approved by the city council will be sent to the state liquor board for approval and licensing.