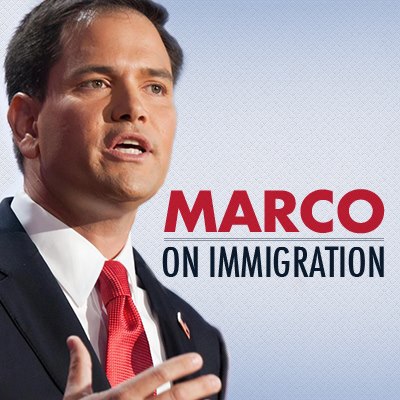 MIAMI (AP) — Marco Rubio’s campaign unveiled a pair of ads Friday to promote his hardline stance on immigration and counter criticism from Jeb Bush and other Republican rivals on the contentious issue.

In one ad, Rubio, speaking directly into the camera, says he opposes amnesty and would deport “criminal aliens,” and will roll back President Barack Obama’s executive orders allowing certain people, who entered the country illegally, to stay.

“If we aren’t 100 percent sure who you are and why you are coming to America, you’re not getting in,” Rubio says in the ad, echoing comments he made in Thursday night’s Republican debate in South Carolina.

The ad also features Rubio vowing to complete a 700-mile border wall with Mexico and hire 20,000 more border patrol agents. He also singles out Bush as “desperate” for running negative ads against him.

The other ad features a woman whose brother was killed in 2010 while working as a U.S. border patrol agent in southern Arizona. From the “border to the battlefield,” she says, Rubio “will give people like my brother the support they need.”

The ads underscore how critical the issue of immigration has become for Rubio, who co-wrote a lengthy 2013 immigration bill that detailed a path to citizenship for many of the 11 million immigrants in the country illegally. The legislation passed in the Senate on a bipartisan vote but ended up dying in the House. Rubio has since distanced himself from the sweeping bill, saying he wants to secure the border before dealing with the millions of people living in the U.S. illegally.

Rubio’s anger at Bush was directed at an ad produced by Right to Rise, the super PAC supporting the former Florida governor. The ad portrays Rubio as a weather vane spinning in the wind to jab at his flip-flop on immigration. The ad says Rubio supported then opposed amnesty and backed his immigration bill before turning against it.