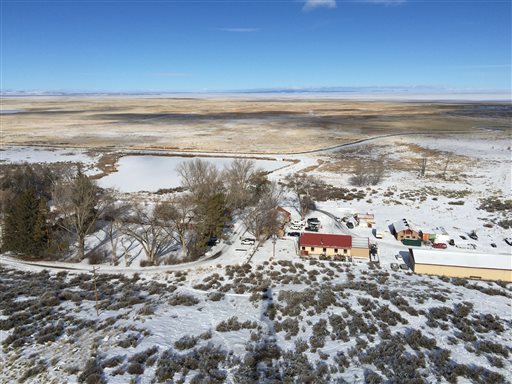 The Malheur National Wildlife Refuge near Burns, Ore., is seen from atop an old fire lookout on Friday, Jan. 15, 2016. A small, armed group has been occupying the refuge since Jan. 2 to protest federal land use policies. (AP Photo/Keith Ridler)

Kenneth Medenbach, 62, of Crescent was arrested at a grocery store in Burns for investigation of unauthorized use of a motor vehicle, authorities said.

It was unclear if he has a lawyer. According to federal court records Medenbach is already facing charges in U.S. District Court in Medford after authorities said he illegally camped on federal land between May and November last year.

Authorities also say they recovered a second stolen vehicle from the refuge but provided no other details. U.S. Fish and Wildlife Service previously reported the vehicles had been stolen.

So far authorities have not tried to remove the group from the Malheur National Wildlife Refuge as the standoff hits the two-week mark. As it drags on, people in the high desert area are growing increasingly weary and wary of the group.

Cement barriers have been erected to block streets around the county courthouse in the small eastern Oregon town of Burns, where police from around the state have set up a command center.

About 30 miles to the south at the refuge, other protesters carrying what appear to be military-style rifles scan the snow-covered rangeland from atop an old fire lookout that gives them a sweeping view of roads leading into the area.

“If we all keep a calm about us everything will be OK,” Brenda Pointere said Thursday as she exited a Burns restaurant. “It started out calm, but the longer it goes on — you start to hear rumors.”

The occupation started Jan. 2 as a protest over two area ranchers who had been convicted of arson being returned to prison to serve longer sentences.

Afterward, a group led by Ammon Bundy traveled to occupy the refuge to protest the ranchers return to prison and demand that the 300-square-mile refuge be turned over to local control.

Bundy said he understood the frustration of Harney County residents.

“They have been suppressed to the point where they’re ready to act,” he told The Associated Press on Thursday inside a heated wildlife refuge building while his brother, Ryan, and two women sat nearby.

Burns, nearby Hines and the local area have been in an economic tailspin for decades after the loss of a lumber mill that some blamed on federal restrictions involving timber harvests.

Restrictions on other federal lands are a common theme of frustration.

The Bundys had planned a meeting with community members Friday night, but it was in limbo after county officials said they couldn’t use the fairgrounds.

Arizona rancher Robert “LaVoy” Finicum, a spokesman for the group, told reporters Friday that protesters were still hopeful the meeting might occur next week, perhaps Monday, if they can find a location. He criticized local officials for “making sure we have no access to facilities to talk to the residents.”

The group has said they won’t leave until the ranchers jailed for arson are freed and the refuge is turned over to local control.

Locals who agreed to be interviewed were themselves conflicted, expressing anger toward federal land policies but bothered by the armed takeover.

“I don’t agree with anything they’re doing right now,” Ben McCanna said about the occupiers at the refuge.

But McCanna, 54, also said the ranchers’ return to prison was wrong, and that he was irked that the U.S. Forest Service closed off access to one of his favorite camping spots in nearby Malheur National Forest.

The issue of land management is one discussed throughout the West. A group of mostly Republican congressmen is holding meetings in southern Utah next week to hear concerns from local officials who worry a Bureau of Land Management proposal unfairly restricts livestock grazing, motorized recreation.