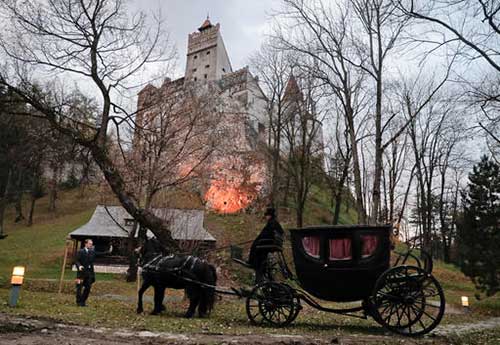 BUCHAREST, Romania (AP) — All night long, a cold wind howled around the gothic castle that inspired the Dracula legend, as a Canadian brother and sister became the first people to pass the night there in 70 years.

But it wasn’t the wind that kept Robin Varma, a PhD student in political science, awake at Bran Castle in Transylvania. Rather it was the incessant chattering of his sister.

“He put the lid on his coffin so he could sleep. … He was sick of hearing me talk,” Tami Varma, an events manager from Ottawa, told The Associated Press Tuesday.

The pair outdid 88,000 people who entered a competition hosted by Airbnb to get the chance to dine and sleep at the castle in Romania, by describing how their grandfather — Devendra P. Varma, a scholar of English gothic tales and an expert in vampire lore — had visited the medieval fortress in 1971.

They arrived at dusk Monday in a stagecoach, and were welcomed by Dacre Stoker the great-grandnephew of Bram Stoker who wrote the 1897 horror novel. They later dined on chicken paprikash and red wine, serenaded by a string quartet, before curling up for the night in red-velvet-lined coffins — but sleep eluded them.

It wasn’t just the talking, or the wind howling, though. Another mysterious sound spooked the pair.

“We have a strong feeling there were invisible guests walking along the castle corridors last night, ” Tami Varma said, hinting that Count Dracula may have paid a fleeting visit. “But we did live to see sunrise.”