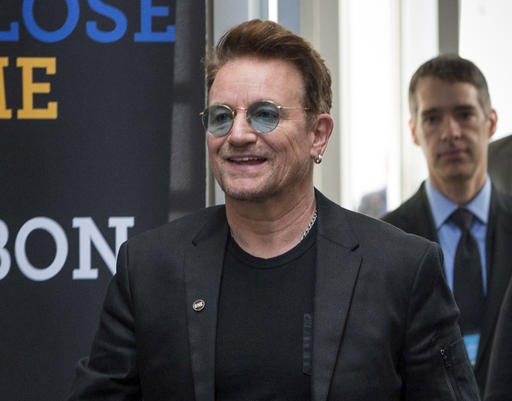 FILE - In this Sept. 17, 2016 file photo, Bono arrives at the Global Fund conference in Montreal. Bono will be honored as Glamour magazine's first Man of the Year among the magazine's Women of the Year recipients, on Nov. 14 in Los Angeles. (Paul Chiasson/The Canadian Press via AP, File)

NEW YORK (AP) — Glamour’s annual Women of the Year list always takes in a lot of territory, from noteworthy fashionistas and sports heroes to social justice activists and business leaders.

Enter Bono: The first Man of the Year among the magazine’s Women of the Year, all to be honored at a Nov. 14 ceremony in Los Angeles.

“We’ve talked for years about whether to honor a man at Women of the Year and we’ve always kind of put the kabash on it. You know, men get a lot of awards and aren’t exactly hurting in the celebration and honors department,” said Cindi Leive, Glamour’s editor-in-chief.

“But it started to seem that that might be an outdated way of looking at things, and there are so many men who really are doing wonderful things for women these days. Some men get it and Bono is one of those guys,” Leive said in a recent interview.

Well, not just by talking the talk and wearing a feminist T-shirt, she said. Not that there’s anything wrong with that stuff, of course.

Instead, the U2 frontman has turned his attention, his high-volume voice and presence as an activist, squarely on women and girls who need it the most, those in extreme poverty around the world. Last year, Bono and his One campaign launched a “Poverty is Sexist” movement, armed with facts and figures.

Roughly 62 million girls are denied a right to education around the world, according to a One report, and half a billion women can’t read.

In a letter to world leaders, Bono and numerous other celebrity signers, from Robert Redford to Shonda Rhimes, called it an outrage that girls account for 74 percent of all new HIV infections among adolescents in Africa.

“The idea that a man who could select any cause in the world to call his own, or no cause at all, is choosing to work, and not just for one night or at a special event, but consistently — day after day and month after month — on behalf of women is incredibly cool and absolutely deserves applause,” Leive said, noting Bono’s AIDS-fighting Red campaign as well.

So how did the man of the hour take the news? Bono’s wife, Ali Hewson, had some thoughts, Leive said.

“Apparently he turned to his wife and broke the news and she told him, eh, I think you still have some work to do,” she laughed.

Bono said in a statement Tuesday from Glamour that the battle for gender equality won’t be won unless men step up and lead alongside women.

“We’re largely responsible for the problem, so we have to be involved in the solutions,” he said.

Glamour will feature them all in the December issue. Rounding out the winners:

SIMONE BILES: At 19, she has 10 world championship gold medals and five medals from the 2016 Olympics. Since Rio, she’s been writing her memoir, “Courage to Soar,” out this month.

But it hasn’t always been easy. She was in foster care when her biological grandparents adopted her. In 2013, her gymnastics confidence crumbled and with the help of a sports psychologist she learned to trust her talent — and enjoy the ride.

GWEN STEFANI: It’s been quite a year for this mom of three. There’s her work on “The Voice,” her divorce from Gavin Rossdale, her romance with Blake Shelton and her first solo album in a decade, “This is What the Truth Feels Like,” which is also her first to debut at No. 1.

“Sometimes to be woken up again in life you need to go through some really bad, hard times,” she told Glamour. “I feel like I got woken up this year.”

Leive said of Stefani, “She’s always kind of been like the spirit animal for every girl who just wanted to be herself.”

ZENDAYA: Girls, Leive said, “love her, they relate to her.” Why? “Because she stands for a forthright approach to life.”

The former Disney star has more than 33 million followers on Instagram, using her social media presence to support efforts to end hunger and stop the spread of AIDS. At just 20, she is a strong voice against bullying and a positive one in helping girls embrace their own standards of beauty.

“Beauty is in the eye of the beholder and the person who should be beholding that beauty is you,” Zendaya told Glamour.

She was propelled further into the spotlight last year after the Oscars when Giuliana Rancic remarked on “Fashion Police” that Zendaya’s dreadlocks made her look like she smelled of patchouli oil or weed. Rancic later apologized on air.

EMILY DOE: Former Stanford University athlete Brock Turner was convicted of attacking her while she was passed out near a trash bin on campus in January 2015. Turner’s six-month prison sentence sparked national outrage and ignited a debate about campus rape and the criminal justice system.

She has chosen to remain anonymous but wrote an essay about the experience that received wide attention. She has written on the subject again in the December issue of Glamour.

“Her voice literally went around the world,” Leive said. “Her words and the eloquence of her writing really made everybody stop in their tracks and pay attention.”