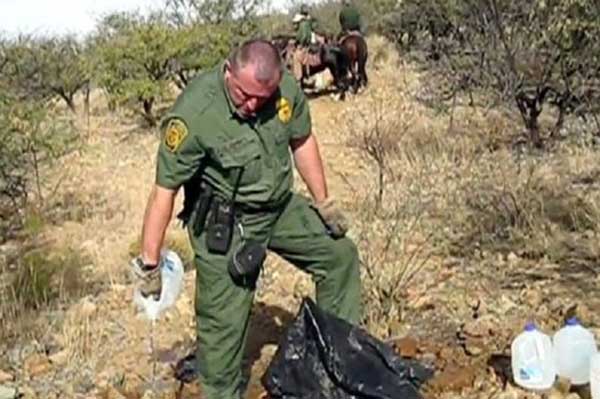 A U.S. Border Patrol officer opens and drains a water bottle left by No More Deaths volunteers to help migrants in the Agua Prieta National Wildlife Refuge in 2017. (NoMoreDeaths)

Ariz. — Government prosecutors in Tucson federal court are set to start the retrial of a humanitarian aid worker who helped migrants in the Arizona desert. The original trial of Scott Warren on charges related to providing food, water and shelter to undocumented migrants ended in July with a deadlocked jury.

The 36-year-old Warren, a geography professor and volunteer with the aid group No More Deaths, was arrested in January 2018 by Border Patrol officers in Ajo , near the U.S.-Mexico border. According to Paige Corich-Kleim, media coordinator with No More Deaths, the group plans to continue its protests against the government.

“Throughout the trial we’re going to be continuing our work, so we’ve kept putting water out and providing humanitarian aid throughout this whole trial,” Crich-Kleim said. “We’ll also every morning just have people gathered outside the court for support and then we’re going to be packing the courtroom.”

Prosecutors are seeking to convict Warren on two counts of human smuggling, a felony that could bring a 10-year prison term. Four other aid volunteers were convicted on misdemeanor charges last year for leaving food and water in a refuge near the border.

The Tucson medical examiner’s office said more than 3,000 migrants have died in the southern Arizona desert over the past 20 years. Corich-Kleim said hundreds more may have been saved by providing food and water near the border.

“The arrest came a couple hours after we released a report and a video of Border Patrol agents destroying humanitarian aid supplies,” she said. “The arrest is pretty retaliatory, kind of, against the organization for speaking out.”

She expressed optimism that Warren would not be convicted this time around either.

“During the initial trial, it was two counts of harboring and also conspiracy to transport and harbor, and they dropped the conspiracy charges,” Corich-Kleim said. “I think throughout the trial it became pretty clear that they didn’t really have much of a case to back up those charges. But I think the same can be said for the harboring charges.”

Warren’s case has drawn both national and international attention, with a group of United Nations human rights experts unsuccessfully calling on the U.S. government to drop the charges. The trial is expected to last about three weeks.