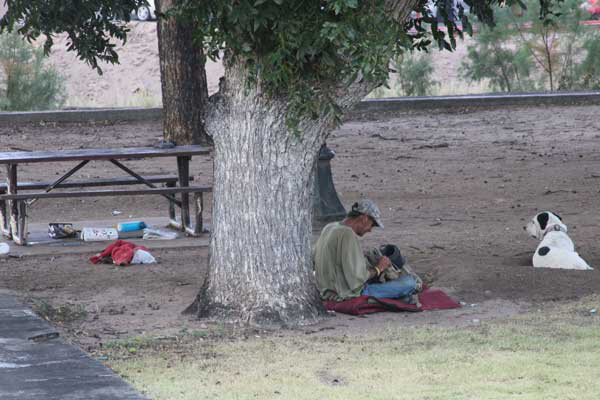 The Graham County Board of Supervisors voted to use more than $353,000 in Community Development Block Grant funds to help the Gila Valley Ministerial Association develop a day-use respite facility for those on the street. - David Bell Photo/Gila Valley Central

SAFFORD — The Graham County Board of Supervisors have taken the first step in development of a respite facility for the homeless in the Gila Valley.

On Monday, the board voted unanimously to use more than $253,000 in Community Development Block Grant funds toward development of a day-time only facility.

“Picnic tables, a small office, storage unit, bathrooms, laundry capabilities; we would be all in support of that next step,” said Vaughn Grant with the Gila Valley Ministerial Association.

Grant said the Gila Valley Ministerial Association, through its nonprofit Samaritan House, can support a facility with either a part-time or full-time director, funded by either renting or selling land it received through a donation for a homeless shelter. The association also has volunteers who can help at the facility.

A facility would be permitted in Safford in a C-2 zone. Estimated building cost is $70 to $100 per square foot for a basic metal shell building with cement flooring, and Grant said there is the strong possibility of the land being donated.

“I was concerned about the ongoing costs and what our involvement would be up unto this point, but if we use the CDBG money for this it might be . . . the easier thing considering that we wouldn’t be operating a respite shelter, and someone else is doing that and not looking for ongoing funding from us,” said Supervisor Danny Smith, R-Dist. 3.

The supervisors chose the respite facility over six other options, including:

● Improvements to playground facilities at the Graham County Fairgrounds

● Improvements to picnic areas in Wet Canyon and Noon Creek

● Right-away acquisition and sidewalk improvements along 1st Avenue in Thatcher

County Manager Dustin Welker suggested using the Community Development Block Grant money for improvements to the park facilities at Graham County Fairgrounds, and use any American Rescue Act funds that come in to the county for the respite facility.

He said that homeless shelters are encouraged expenditures under the American Rescue Act and don’t come with the five-year deadline that CDBG funding has in place.

However, the board voted to use the CDBG funds for the respite facility due to uncertainty on whether the county would receive American Rescue Act funding and at what level.