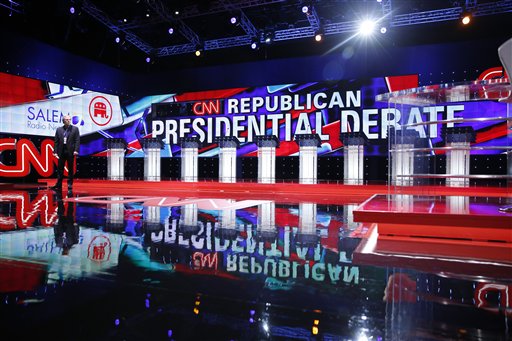 Trump will once again be standing at center stage, reflecting the billionaire businessman’s surprising dominance in the GOP primary campaign. His newest test, at least in the leadoff Iowa caucus, comes from Texas Sen. Cruz, a chief antagonist of Republican leaders in Washington.

The debate will be the first for Republicans since the attacks in Paris and San Bernardino, California, that increased concerns about terrorism in the United States. Hours before the debate was to begin, officials in Los Angeles closed all schools after an emailed threat.

Trump’s response to the terror attacks was to call for a total ban on Muslims entering the U.S. The proposal was roundly criticized by his rivals but appears to be resonating with some of his supporters.

With less than two months until voting begins, Cruz is trying to pitch himself as a more electable alternative to Trump. The Texas senator has a robust campaign infrastructure and conservative appeal, though some Republican leaders believe his hardline positions and prickly demeanor would put him at a disadvantage in a general election contest against Democratic front-runner Hillary Clinton.

Trump and Cruz have maintained a friendly relationship for months, but signs of a split have emerged in recent days, with Cruz appearing to question Trump’s judgment at a private fundraiser, according to audio obtained by The New York Times, and Trump calling Cruz “a little bit of a maniac.”

Trump didn’t go after Cruz by name during a Las Vegas rally on the eve of the debate, but said the prime-time faceoff could turn messy.

“I am giving them a chance for them to make total fools of themselves in front of millions of people,” Trump said, adding that he was expecting to be attacked. “This will not be like an evening in paradise for me. Do we agree?” he asked.

Cruz and Rubio have been sparring from afar, particularly over national security. Rubio has tried to brand Cruz as an isolationist and has criticized his support for ending the bulk collection of Americans’ phone records, saying it weakens the government’s ability to identify potential terrorists.

“There are some differences in policy,” Rubio said of Cruz in an interview Monday with The Associated Press. “I think we need to be the national security party, the party of strong national security, committed to ensuring we have the strongest military force in the world.”

More broadly, Rubio’s campaign is eager to cast Cruz, who prides himself on being a conservative “truth-teller,” as a politically expedient flip-flopper who is willing to say whatever is necessary to win an election. Rubio’s campaign has raised questions about Cruz’s position on sending troops to the Middle East as well as whether he would allow immigrants living in the U.S. illegally to stay here.

Cruz’s campaign has dismissed the criticism, with spokesman Rick Tyler saying, “Nobody believes Senator Cruz is weak on national defense and security.”

The debate was being held at the Venetian Hotel, which is owned by casino magnate Sheldon Adelson, one of the GOP’s prolific donors, and he and Trump were to meet beforehand.

“They are longtime friends,” said Trump spokeswoman Hope Hicks, via email. “Mr. Trump would be happy to have Mr. Adelson’s support but doesn’t want or need his money.”

The debate is particularly crucial for some of the more experienced GOP politicians who have struggled to gain traction in a crowded field.

That’s particularly true for Florida Gov. Jeb Bush, the former front-runner and elite fundraiser who has been languishing for months. While Bush’s advisers have brushed aside suggestions he should drop out of the race before voting begins, a weak performance would increase those calls.

One establishment candidate who does appear to be gaining ground is New Jersey Gov. Chris Christie. He’s hanging his White House hopes on a strong finish in New Hampshire, where he’s winning important endorsements and climbing in preference polls.

“I’ve been making executive decisions for 13 years and been held accountable for them,” Christie told the AP Monday. “There’s no other way to get ready for the presidency than that; you have to have executive experience to be successful.”