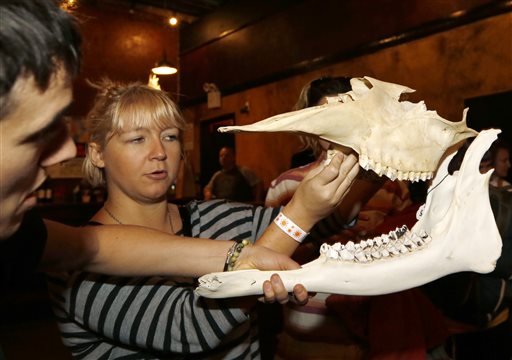 Nina Smith and owner Wilder Duncan, left, survey pieces of a Maine moose jaw, Sunday, Dec. 13, 2015, at the Morbid Anatomy Museum Holiday Flea Market in the Brooklyn borough of New York. As the holiday season gets into full swing, shoppers have been flocking to a Brooklyn flea market for gifts in a category all their own. About a dozen vendors displayed their horrific wares Sunday at the holiday market. People waited in long lines to get in. (AP Photo/Kathy Willens)

NEW YORK (AP) — What to get the loved one who has everything? Steven Rabinowitz wracked his brain before settling on (spoiler alert, relatives!) a raccoon skull.

“We’ll see how it goes,” Rabinowitz, 31, said as he revealed his purchase near a crowded display of animalskulls, antique medical instruments — and a bowl full of human teeth.

The bizarre bazaar that drew Rabinowitz and other curious clientele Sunday was the Morbid Anatomy Museum Holiday Flea Market — offering gifts both frightful and festive.

In the dim light of a pair of golden chandeliers, about a dozen vendors displayed their horrific wares: pieces ofhuman skulls, a wide variety of taxidermy and earrings made from muskrat jaws. One vendor, Divya Anantharaman, stood by her display of two-headed taxidermied birds — complete with Santa hats.

Joanna Ebenstein helped open the museum in 2014 as an extension of an art project on anatomical history and artifacts. Initially, Ebenstein said she had to hide her odd obsession from her co-workers at a children’s book publishing company.

“I didn’t want them to know I was into all this scary death stuff,” she said.

The museum hosts a wide range of events like taxidermy classes, lecture series and film screenings. But Ebenstein said the flea markets are the most successful.

“People like me don’t want to buy normal Christmas stuff,” she said.

The flea markets have proven so popular they had to be moved from the museum’s basement to a larger space around the corner after the wait to get in reached 2 1/2 hours last spring.

Sunday’s was the third of the year. The line stretched around the block.

Anantharaman, who was hawking the two-headed birds, quit her day job two years ago to turn her taxidermy hobby into a full-time career.

The holidays are her busiest time of year, when consumers yearn for that special something that sets their gift apart from the pack — or flock.

“It’s the same reason they want to buy anything handmade,” she said.