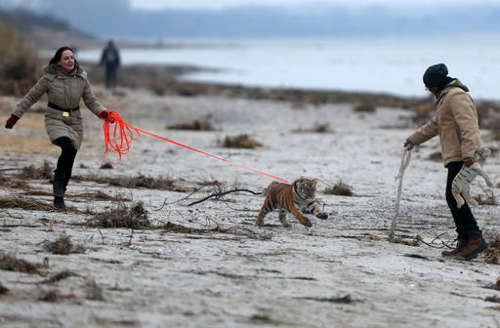 In this Jan. 9, 2017 photo Monica Farell, left, and her husband Mann Saad Rose walk four-month-old tiger baby girl Elsa at the beach in Luebeck, northern Germany. The Siberian tiger was born in a circus and rejected by her mother. She is raised now in the house of circus artists and will be moving to the zoo in Dassow into her own enclosure in March. (Jens Buettner/dpa via AP)

BERLIN (AP) — Four-month-old Elsa was born in a traveling circus and rejected by her mother. Now the little Siberian tiger is being cared for by a human couple, and she’s growing up fast.

Monica Farell and Saad Rose, who run a park with 13 tigers and five lions near Germany’s Baltic coast, are taking care of Elsa at their home. She’s getting cat milk from the bottle, along with chicken, beef and egg yolk.

Farell told news agency dpa “it’s a full-time job, like with a baby.” That includes taking Elsa for walks in the woods or on the beach.

Elsa, who already has sharp claws and a fighter’s instincts, is set to move into an enclosure in the tiger park in March — with an older female tiger as her neighbor.