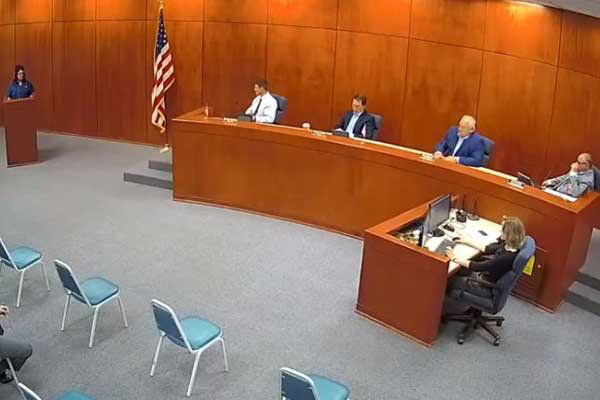 The Graham County Board of Supervisors listen to a resident in the area of Arena Way as to why she opposes a zoing change for a neighboring property that would allow home on half-acre lots. - Contributed Photo/Graham County

SAFFORD — An effort to change zoning to allow for a lot split that would result in three new homes on half-acre parcels was met with resistance from neighbors and the Graham County Board of Supervisors.

The request from Sean Tate to rezone his property on Arena Way from General Land Use (A) to Single Family Residential (R-R) was unanimously rejected by the Board of Supervisors Monday.

Neighbors expressed concern that homes on half-acre lots would not mix appropriately with their homes on one-acre lots, as required of the zoning when they developed their land.

Tate expressed a desire to donate some land to the county for a roadway, which is currently on privately-owned land, in exchange for the re-zoning, but that offer was not accepted.

“The density is what’s before us,” said Supervisor Paul David, D-Dist. 1. “I can’t support subdividing and having three half-acre lots.”

Tate now has to wait six months before he can resubmit his request to the county.