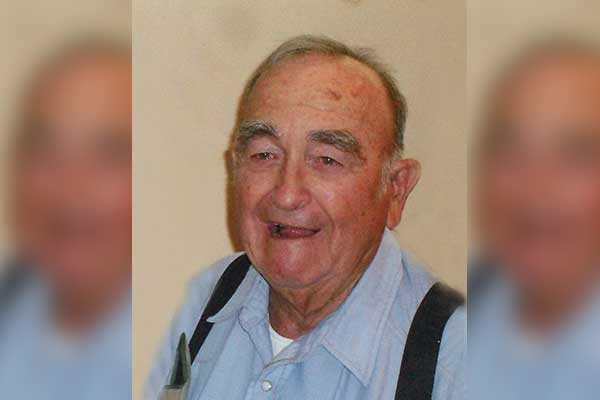 Ray was born January 24, 1928, in Glenbar, Arizona, to Rose Emily Snyder and MJ (Meredith Jay) Ferguson. Ray was the second of three sons born to Rose and MJ who owned and operated the Ferguson Mercantile Store and Ferguson Farms in Glenbar. Ray grew up working on the family farm which he later owned and operated himself.

Ray met his future wife, Roselyn Brown, at the Fannin Service and Supply in Safford where she worked as bookkeeper. They were married on April 1, 1961, and had five children; Kristi, Debbie, Marc, Anthony and Rosemary. Ray and Rosie Mae (as he called her) lived in Thatcher for a short time before purchasing a home in Pima. They called Pima home for the remainder of their lives.

He held two degrees from the University of Arizona. While attending the U of A, Ray became a pilot. In 1948 he flew his parents to Philadelphia for the Republican Convention flying over Washington, D.C. without getting shot at. They tied down the small, two engine airplane at the airport. During their visit a strong wind storm blew most of the other planes over, but not theirs. While his parents attended the convention, Ray visited all the art museums. He later joined the Air Force and flew an F-80C Shooting Star jet fighter-bomber during the Korean War. He spent about six months in Korea, blowing up bridges he would say, before being transferred to Japan where he flew for the remainder of the war.

Ray was first and foremost an artist. He drew, painted, sculpted and photographed most of his life. His paintings were landscapes of various locales in the Gila Valley. His sculptures were of animals; coyotes, javelinas, cheetahs, baboons depicted in various poses. Wherever he was sitting there were art magazines stacked around him. Talk to him about any artist and he would pick out a magazine and go directly to the page containing the artist’s work. Ray listened to classical music and operas. He said he could remember the first time he heard a classical music record and thought it was the most beautiful sound in the world. Walk into his house and you could find Ray sitting in his chair, eyes closed enjoying his music.

Ray was a farmer. He operated Ferguson Farms for the family for several years. After the death of his parents he purchased the farm. They grew cotton and raised some cattle over the years. Ray and Roselyn owned Ferguson Farms until selling it in 2008.

Ray was a bow hunter and spent many hours hunting deer and javelina. He was an atlatl competitor often traveling out of state to participate in the spear throwing contests. Ray was a linguist speaking fluent Spanish, some Japanese and Korean, and Russian which he and his mother Rose learned together in 1961. Ray enjoyed archelogy, in particular the Anasazi and he would delve into his stash of maps pulling out one to show you the location of certain ruins. Ray was an avid reader and remember everything he read. Later as his eyesight was failing, he would ask family members to look up something on their phone or tablet and tell him what it said. Ray knew every inch of the Gila Valley, names of locations and its history. A ride with him on his Razor or in a vehicle became a history/geography lesson of the Valley. Ray was always a gentleman. Even during his last days as he was struggling to breathe and speak each request contained “please” and followed up with “thank you”. He treated all with respect and dignity.

Graveside services for Ray will be conducted Saturday morning, January 26, 2019, at 10:00 a.m., at the Pima Cemetery with military honors conferred by the Gila Valley Veterans Honor Guard.