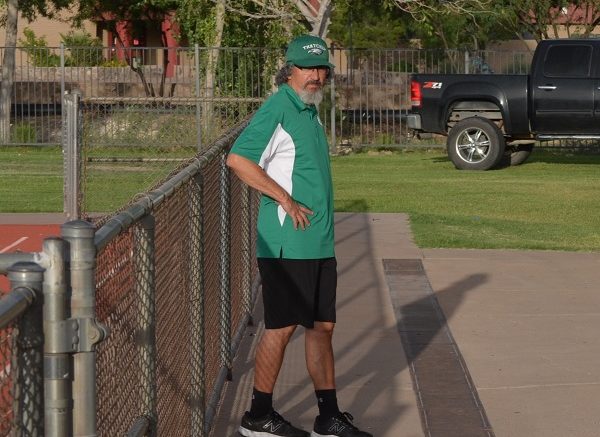 Ramon Morales looks at the weather prior to the season opener at Morenci. Photo by Lee Patterson

THATCHER — Those closest to the program knew that this was Ramon Morales’ last year as head coach of the Thatcher football team. He let Athletic Director James Hicklin know that regardless of the results of the 2109 season, it would be his last.

Morales took over after Sean Hinton was dismissed before the 2018 season. The team won the 2018 2A State Football Championship, their third in a row. The Eagles were 22-5 under Morales, including their perfect 14-0 2018 season.

Hicklin told GilaValleyCentral on Friday night that the job will be open to all interested coaches. This will be the third coaching position that Hicklin will be in charge of filling in his first year at Thatcher. He hired a boys and girls basketball coach his first month on the job.

Morales released the following statement to the media on Saturday morning:

“I had agreed to take over the program for one year. When Coach Hinton resigned his teaching position in December 2018, I asked my coaches if they were up to the challenge of going for 4 State Championships in a row. I felt we had an outside shot to repeat if everything fell into place and it was best to keep the staff intact. I told my AD (James Hicklin) before the season, this was it either way.”

Morales has been coaching at Thatcher for 30+ seasons in various capacities and hasn’t ruled out being on the staff of the next head coach.