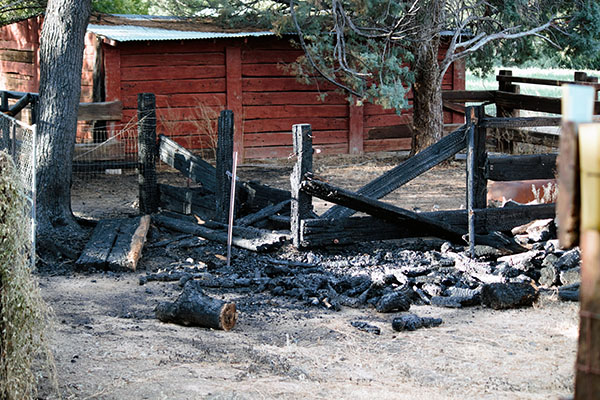 Jon Johnson Photo/Gila Valley Central: The charred remains of this corral shows how intense the fire was before being extinguished by the Pima Fire Department.

PIMA – The quick action of a citizen responder and Pima firefighters prevented a home from being overtaken by fire July 18.

Mail carrier Jordan Jarvis was running his route at about 12:30 p.m. and was preparing to deliver the mail at a post office box at the corner of 300 South 400 West when he noticed a fire behind a house across the street.

“I looked at the roof line and there were flames going 30 and then maybe 40 or 45 feet as it climbed up a pine tree, so I figured that it wasn’t just somebody burning weeds,” Jarvis said. 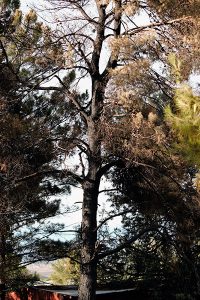 Jarvis called the fire into Graham County Dispatch, which then rang the alarm for the Pima Fire Department.

About a block away, Pima Fire Department Safety Officer Daryl Weech was eating lunch when he heard the call. He then sent his son to the station and responded to the fire site to assess the situation.

There he saw a pine tree engulfed with fire, which quickly spread to a nearby wood pile and a wooden corral. Weech grabbed a garden hose and fought the fire through its intense heat to keep it from spreading to the property’s adjacent residence and unattached garage.

“If we didn’t have the garden hose, and if I didn’t get there when I did, it could have gotten really bad really fast,” Weech said. “The guy that was in the house didn’t even know it was going on until the police chief knocked on the door.”

As Weech battled to keep the fire at bay, a Pima Fire engine arrived and extinguished the blaze. According to Pima Fire Chief Adam Hoopes, the resident had left a small pile of pine needles burning unattended and wind gusts spread the fire to the pine tree, along with the pile of old wood and corral.

Weech said the building materials of the home also played a part in averting disaster.

“Because it was brick, it bought us the time to get everything taken care of,” Weech said. “He was very fortunate that was all that happened.” 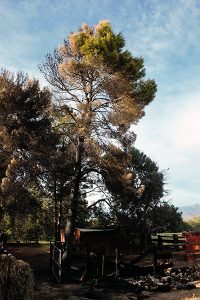