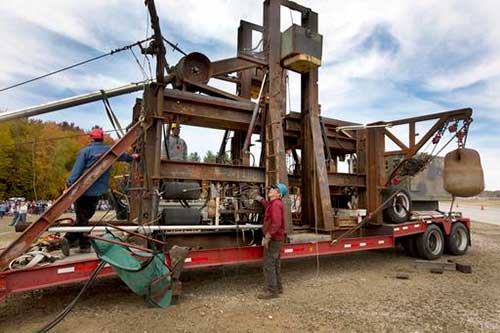 Teams from as far away as Virginia came to the race track to use trebuchets, catapults and air guns to launch the fall fruit, some of which made a gourd-geous arc across the New Hampshire sky.

While the pumpkins — some weighing in at 1,000 pounds or more — were the featured item, they were not only things which were being fired. Some smaller pumpkins flew up to two-thirds of a mile across the speedway.

Other acts of wanton destruction for general amusement included large, crane-like launchers to throw cars, motorcycles, a boat and pianos. Not all of the shots were successful. When a pumpkin misfired, participants referred to the result as a “pie.”

Some of the teams clearly took seriously the task of getting their medieval or earlier weapons systems in place and ready to launch.

“A lot of work to travel and set up,” said Dave Shepard, a member of the Mista Ballista team from Framingham, Massachusetts. “Takes six guys maybe 10-12 hours.”

Some of the launchers demonstrated significant shade-tree ingenuity. One team’s rig used garage door opener springs, while another put a half mile of surgical tubing into service.

Category winners got a trophy and a story to tell.