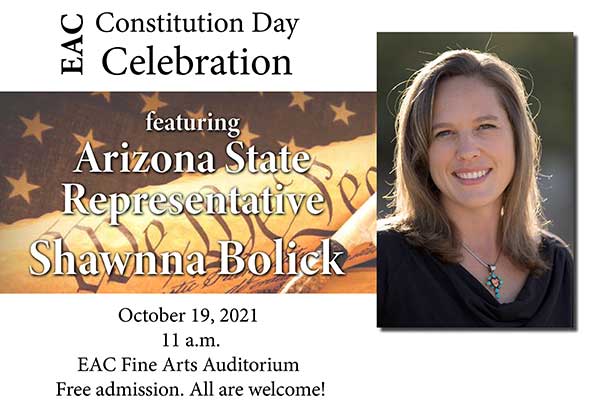 “We feel it’s essential to demonstrate to our students the importance of the Constitution,” explained Dr. Gary Sorensen, EAC’s dean of students and ASEAC adviser. “That’s why, each year at this time, we bring an expert in the study of the Constitution to share their passion for this blueprint of democracy.”

The Honorable Shawnna Bolick is serving her second term in the Arizona House of Representatives, having been first elected in 2018. She serves and as the Chairman of the Ways and Means committee and is the Vice-Chairman of Criminal Justice Reform. She previously served on both the Education and Federal Relations Committees. She has long served in education, including as a current board member to her children’s elementary school, Benchmark School. She is a past school board member of BASIS Scottsdale’s advisory board; and a former Director of BASIS Texas Schools, Inc.’s Governing Board.

In 2015, Bolick was appointed by Governor Doug Ducey and confirmed by the State Senate to serve on Arizona’s Early Childhood Education and Health Board.  With her strong interest in Arizona’s academic standards, she is also a past member of the Arizona State Board of Education’s Academic Standards Development Committee as a public high school parent.

Her career highlights include working on Capitol Hill for her birth state’s U.S. Senator, Rick Santorum, and as a policy researcher at The Heritage Foundation on the No Excuses: Lessons from 21 High-Performing, High-Poverty Schools civil society project.  She later worked for then-Texas Lieutenant Governor Rick Perry’s special project on the Advisory Council on the Digital Economy.

Bolick is a published author. She currently lives in Phoenix with her husband, Supreme Court Justice Clint Bolick, and their children.