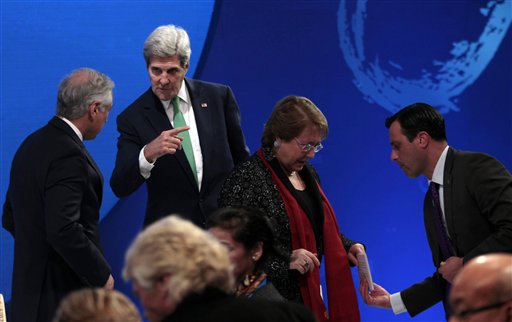 U.S. Secretary of State John Kerry, second from left, and Chile's President Michelle Bachelet, second from fight, leave at the end of the Our Oceans international conference on marine protection in Vina del Mar, Chile, Monday, Oct. 5, 2015. President Barack Obama declared new marine sanctuaries in Lake Michigan and the tidal waters of Maryland on Monday, while Chile blocked off a vast expanse of the Pacific Ocean near the world-famous Easter Island from commercial fishing and oil and gas exploration. (AP Photo/Luis Hidalgo)

VALPARAISO, Chile (AP) — President Barack Obama declared new marine sanctuaries in Lake Michigan and the tidal waters of Maryland on Monday, while Chile blocked off more than 200,000 square miles of the Pacific Ocean near the world-famous Easter Island from commercial fishing and oil and gas exploration.

The announcements came as top officials, including U.S. Secretary of State John Kerry, attended an international conference on marine protection in the Chilean port city of Valparaiso. Several nations also outlined plans for tracing seafood imports to combat overfishing and stemming increased pollution in the ocean.

The new protected waters in the United States are the first to be designated as such in 15 years, the White House said in a statement.

The 875-square mile area of Wisconsin’s Lake Michigan extends from Port Washington to Two Rivers, containing a collection of 39 known shipwrecks. Fifteen are listed on the National Register of Historic Places.

The Mallows Bay-Potomac River in Maryland encompasses a 14-square mile area of the tidal Potomac River next to Charles County. Nearly 200 vessels, some dating to the Revolutionary War, are found in the largely undeveloped area that provides habitat for endangered species of wildlife and fish.

The actions are the latest in a series of environmental steps by Obama, who last year set aside some 400,000 square miles of the central Pacific Ocean from commercial fishing, deep sea mining and other forms of resource extraction. The Pacific Remote Islands Marine National Monument is now the largest marine reserve in the world.

In a videotaped message to conference participants, Obama recalled his childhood in Hawaii and Indonesia and said he always maintained “a special love for the ocean.”

“Our economies, our livelihoods and our food all depend on our oceans,” he said, “and yet we know that our actions are changing them. Greenhouse gas emissions are making our seas warmer and more acidic. Marine pollution harms fish and wildlife, affecting the entire food chain. Illegal fishing depletes the world’s fisheries.”

Obama said he would seek to protect more American waters in the coming months.

Chile made its own ambitious declaration, cordoning off a vast expanse of the South Pacific Ocean.

President Michelle Bachelet said the new marine park would protect the ancestral species of Rapa Nui, the name used by the native Polynesians of Easter Island, which is celebrated for its hundreds of human statues carved out of volcanic rock. She was joined by representatives of the island, who clapped their hands and sang after the announcement was made.

Britain, Gabon, Kiribati, New Zealand and Palau have taken steps as well to protect sections of the sea in recent months.

The “Our Ocean” conference also targeted marine pollution resulting from discarded plastics and increasing levels of ocean acidification, which damages coral reefs and shellfish populations. Such concerns are shared by the U.S., which imports 90 percent of the fish it consumes, and Chile, whose coastline of almost 2,500 miles is vital to the economy.

To address overfishing, the Obama administration announced a global initiative, “Sea Scout,” to identify unregulated and unreported activity, and help prosecute illegal fishing organizations. The U.S. National Oceanic and Atmospheric Administration is expanding a program for detecting boats that use lights to attract fishery catch at night and will implement it in Indonesia, the Philippines and three other countries next year.

The “traceability” initiative is supposed to start for the most commonly exported fish species such as tuna, cod, shrimp and crab in September 2016. It would apply to all fish a year later and is designed to provide a full accounting of where exporters are getting their catch and whether they are operating in a sustainable manner. Anyone who wants to export fish to the United States would have to adhere to the conditions. The program needs final approval from the U.S. Senate and several additional countries before entering into force.

“There is literally too much money chasing too much fish,” Kerry told the conference. A third of the world’s fish stocks are over-exploited, he said, calling overfishing a $10 billion-a-year industry.