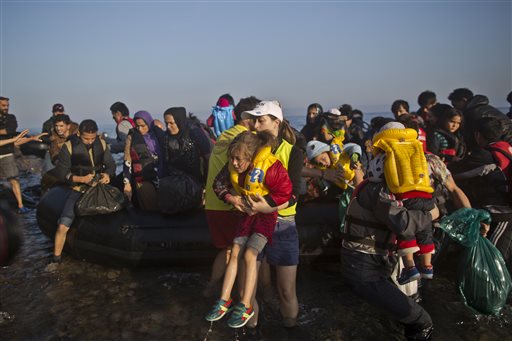 An Afghan refugee girl is helped by a volunteer as she and other migrants arrive on a dinghy from the Turkish coast to the northeastern Greek island of Lesbos, Monday, Oct. 5, 2015. (AP Photo/Muhammed Muheisen)

GENEVA (AP) — The latest developments in the hundreds of thousands of refugees and other migrants passing through Europe on their way west. All times local.

Immigration officials in Sweden say that the number of migrants who arrived last month more than doubled over the previous month to 24,000, bringing this year’s number at the end of September to more than 73,000.

The Norwegian Directorate of Immigration says the 2015 total could reach 25,000

Romania’s prime minister says his country has not been confronted by a large influx of asylum-seekers and should be open to receiving more.

Victor Ponta said Monday Romania has received 944 asylum requests this year, of which 18 were in August. He called it “an insignificant” increase compared to the previous year.

Speaking to lawmakers in Parliament, Ponta said it was easier to support the efforts of countries who are willing to accept migrants “than to build walls, fences.”

He said Romania should increase its allowance to refugees which is currently 3 lei (70 eurocents, 80 U.S. cents) a day and migrants and refugees should have access to health care, education and jobs.

He also criticized Russian airstrikes on Syria, saying they would aggravate the situation.

Romania was one of four eastern European countries to oppose a European Union resettlement plan for 120,000 asylum-seekers. President Klaus Iohannis now says that Romania can cope with the extra migrants it has been asked to take, and merely disagreed with mandatory quotas.

Greek authorities say they have freed 34 men, women and children who allegedly had been locked up in a cramped central Athens flat by a mostly Afghan gang of extortionists that preyed on newly arrived immigrants.

Greece is the main arrival point for hundreds of thousands of refugees and economic migrants seeking a better life in wealthy European countries. Most pay smugglers to bring them in frail boats from Turkey to the Greek islands, and then converge on Athens before heading off overland through the Balkans.

Police say they arrested one suspect in the weekend operation, and are seeking five others, including an Egyptian man.

Police said Monday that the suspect offered Afghan migrants accommodation, bus tickets and forged documents. But once in the flat, migrants faced imprisonment and beatings unless they paid the gang.

The Czech Republic is sending a unit of 25 soldiers to Hungary to help protect the external border of Europe’s passport-free Schengen zone.

Defense Minister Martin Stropnicky says the unit will be deployed for two months starting October 15. Stropnicky said Monday he was going to consult his Hungarian counterpart in Brussels on Thursday about further possible support for Hungary.

Interior ministers of the Czech Republic, Slovakia and Poland will discuss further possible ways of helping Hungary, where about 300,000 migrants have arrived this year.

Poland has sent a helicopter and crew to Hungary to help patrol the border with Croatia. The mission is part of effort by Frontex, the EU’s border agency, to beef up borders in face of the pressure from immigrants.

Joanna Rokicka, spokeswoman for Poland’s Border Guards, said Monday that a Border Guard chopper with eight crew members and one liaison officer was sent to Hungary on Sunday. The mission continues through Nov. 9.

Separate talks on more aid to help protect Hungarian border are being held ahead of Oct. 8 meeting of interior ministers from the Czech Republic, Hungary, Slovakia and Poland.

Thousands of people seeking asylum in Europe are streaming into Hungary from Croatia as they search for paths toward Germany and other destinations in Western Europe.

Spanish rescue services say they have intercepted 301 migrants trying to reach Spain from Morocco in 12 boats over the past three days.

The rest were intercepted Saturday and Sunday at points further east along the southern coast.

The service said that between Jan. 1 and Aug. 31 it helped rescue some 4,188 migrants, 2,307 of whom were taken to Morocco by marine services from that country.

African migrants seeking a better life in Europe often try to reach Spain by crossing the Mediterranean Sea from Morocco.

Tens of thousands of migrants also try to make it to Italy and Greece from north Africa and the Middle East each year.

Leaders from the European Union and Turkey will be fine-tuning a plan to help Ankara cope better with refugees from Syria and Iraq and limit the flow of people leaving to Europe.

Commission spokesman Margaritis Schinas said Monday that the EU wants to “have a contract of mutual confidence that is necessary, given the central role Turkey has played in the refugee crisis.”

Turkey hosts around 2 million refugees, many from Syria and Iraq.

Tens of thousands of people fleeing conflict and poverty have been crossing from Turkey into Greece in the hope of finding better lives in Europe.

A spokeswoman for the EU’s border agency says it is seeking hundreds of additional border guards to help in the task of identifying migrants that are arriving in Europe.

Ewa Moncure said Monday that Frontex appealed to EU and Schengen members last week to jointly provide 775 experts in identification and interpreters. They would be deployed this month to Greece and Italy, which are taking the brunt of the migrant wave.

The agents would reinforce the procedure of identifying people who qualify for political asylum, like Syrians and Afghanis, and economic migrants, who will be returned home. The current numbers of border guards are insufficient to meet the migrant wave of some 420,000 people so far this year. ___

The head of the U.N. refugee agency says a “positive relationship between the Western and the Muslim worlds” is essential to overcome refugee crises like those facing Europe.

Antonio Guterres, the U.N. High Commissioner for Refugees, says there is an urgent need to fight fear of Islam and reduce the lure of extremist ideologies.

He told his agency’s executive committee on Monday that financing has fallen short to handle “mega-crises” like those in Iraq and Syria and other crises in South Sudan, Burundi, Yemen and Libya.

He said “the humanitarian system is financially broke” and 33 U.N. appeals for assistance for 82 million people are 42-percent funded.

The entry regarding a Polish mission in Hungary has been corrected to note that it continues until Nov. 9, following a correction from Polish border guards.