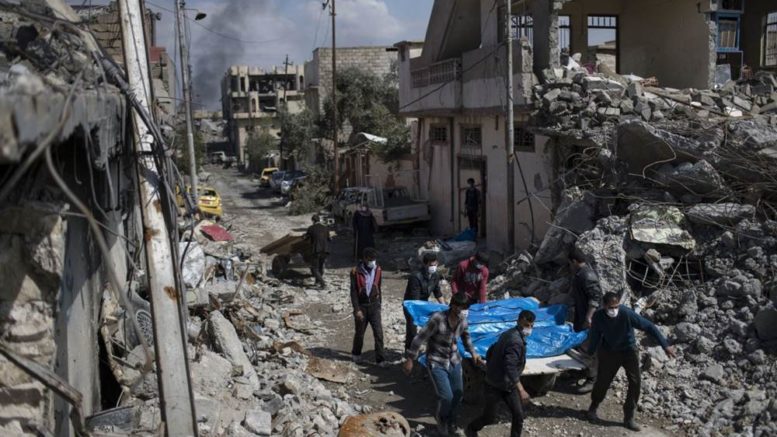 FILE - In this March 24, 2017 file photo, residents carry the bodies of several people killed in airstrikes during fighting between Iraq security forces and Islamic State on the western side of Mosul, Iraq. In a statement released Thursday, May 25, 2017, the Pentagon said a U.S. airstrike triggered explosives planted by IS, collapsing a building and killing over 100 civilians in the city of Mosul. (AP Photo/Felipe Dana, File)

WASHINGTON (AP) — The United States acknowledged Thursday that bombing an Iraqi building in March set off a series of Islamic-State planted explosives, resulting in more than 100 civilian deaths and underscoring the difficulty of rooting out the extremist group’s fighters from its remaining urban strongholds.

The bomb dropped on a building in the city of Mosul set off explosive materials that IS militants had already been placed inside, causing the structure to collapse, the Pentagon said in describing the conclusion of a two-month investigation. The civilians inside were seeking refuge.

The bombing led to the largest single incident of civilian deaths in the nearly 3-year-old campaign. And it illustrates the difficult urban fight U.S. and coalition forces are encountering, including what U.S. officials describe as IS militants deliberately enticing attacks on buildings where they’ve staged explosives and know civilians are inside. The civilians either enter unwittingly or are forced in and locked up.

The conclusion, said U.S. Air Force Brig. Gen. Matthew Isler, is that while the U.S.-led coalition takes responsibility for the airstrike, “a coalition munition was not responsible for the structural failure of the building and the deaths of the civilians inside.” He said IS has tried to set up similar incidents since then, prompting Iraqi and coalition forces to adjust combat tactics and watch locations more carefully in advance of strikes.

The battle for Mosul is key to eliminating IS from Iraq. But it has grown riskier for civilians as the battleground shrinks in the highly populated older section of the city. Humanitarian officials have predicted civilian casualties would spike as more than 400,000 civilians were trapped in the city’s west. A similar scenario could emerge in IS’ self-declared capital of Raqqa, Syria, which U.S.-backed militia are expected to start trying to retake soon.

In a telephone briefing with Pentagon reporters, Isler said the 500-pound precision-guided bomb dropped by a U.S. aircraft on March 17 was intended to kill two IS snipers who posed a threat to Iraqi counterterrorism forces.

The probe found that the U.S. bomb triggered secondary explosions from devices clandestinely planted and strategically placed around the second floor of the concrete building. Isler, the lead investigator, said neither the Iraqi troops nor the Americans who authorized and conducted the airstrike knew civilians were in the basement and first floor of the building, or that explosive materials were present.

Although the U.S. has no video or eyewitness accounts of IS militants planting the explosives, Isler said. Enemy fighters warned people in the building next door to leave the area the night before the explosion. IS militants knew there were innocent civilians in the building that collapsed, he said, and possibly gave them the same warning. He said the neighbors refused to leave and, as a result, were told by IS that “what happens to you is on you.”

Isler said 101 civilians in the building were killed, and another four died in a nearby building. He said 36 civilians remain unaccounted for. They may have been killed in the explosion or fled before or after the attack. The deaths represent about a quarter of all civilian deaths associated with U.S. airstrikes since the air campaign began in 2014.

In this case, the civilians weren’t herded into the building. Isler said it was a home owned by a well-regarded Iraqi, who invited people to take shelter there because it was sturdy and well-built. 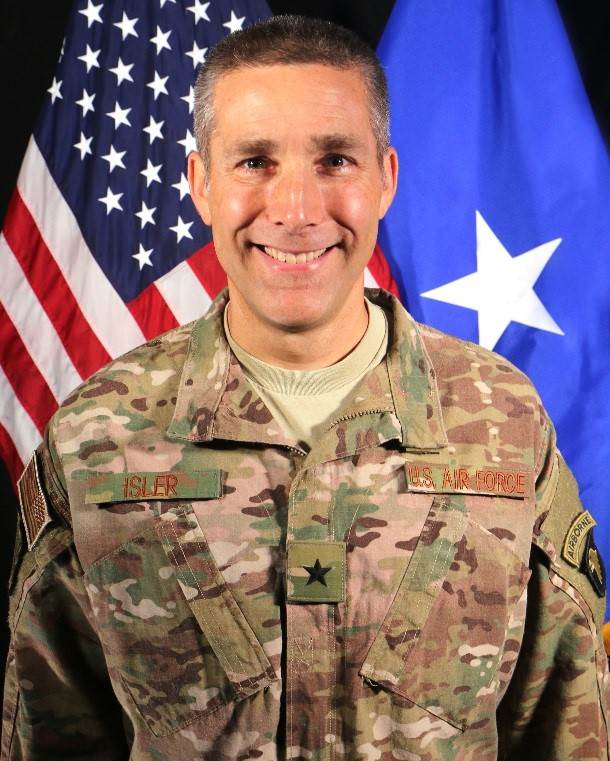 Brig. Gen. Matthew Isler, shown in this undated U.S. Air Force portrait, acknowledged on Thursday, May 25, 2017 that a U.S. airstrike conducted in March triggered explosives planted by IS, causing a building to collapse, resulting in over 100 civilian deaths in Mosul.

Describing a lengthy engineering and scientific analysis, Isler said the bomb dropped by the U.S. aircraft struck the roof and detonated, with “localized damage” to the front and second floor areas of the building. He said the 500-pound bomb contained nearly 200 pounds of explosive weight.

Analysts estimate that it would have taken at least four times that amount of explosives — or at least 1,000 pounds — precisely placed along the walls to bring the building down, Isler said.

That analysis, he said, led investigators to conclude that IS staged a large amount of explosives around the walls of the second floor, underneath the snipers’ position, ensuring that a coalition strike would trigger the second blast and much more destruction.

The area was under surveillance for weeks ahead of the strike. But cloudy weather meant the coalition was unable to maintain constant video on the building for two days leading up to the attack.

Instead, forces relied on other intelligence including visual surveillance by Iraqi commandos who could see part but not all of the building. Isler said IS militants had easy access to the second floor and could have quickly planted explosives out of sight of others.

The Iraqi military saw civilians leaving the building in the days before the attack, Isler said, but may have missed people entering.

Two weeks after the bombing, coalition video caught IS fighters forcing civilians into a different building through holes in the walls and then planting propane containers, he said. The fighters then launched an attack on Iraqi forces, hoping to draw a similar U.S. airstrike on civilians.

The coalition did not take the bait and no civilians were harmed, Isler said.