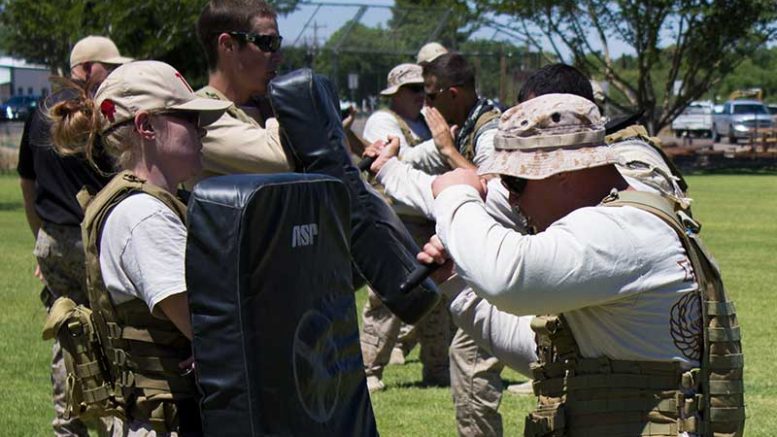 Brooke Curley Photo/Gila Valley Central: In this May 24, 2017 photo, officers from the ASPC Safford Tactical Support Unit train in less-than-lethal tactics using the ASP baton. The first day of training was held at Thatcher Park.

THATCHER – The Arizona Department of Corrections is issuing new weapons to its prisons, including in Graham County. On Wednesday and Thursday, trainers taught 27 officers from the Arizona State Prison Complex (ASPC) Safford Tactical Support Unit (TSU) how to use the ASP baton, a less-than-lethal telescoping metal weapon that is an iconic riot control tool across the world.

The class on less-than-lethal tactics met at the Thatcher Park on Wednesday around noon to learn tactics, and held indoor training and testing at an ASPC classroom on Thursday. Training on the ASP baton was just one part of the sessions. Major David Driver said the collapsible baton replaces the older PR-24 side-handle baton. The ASP has a lower profile and is more concealable than the fixed, 24-inch-long PR-24.

“As technology advances, so does our ability to respond,” Driver said. “Because it does collapse, it can be on the officer’s belt and it is not as intimidating to, you know, not only the inmates and other staff but also the public.” 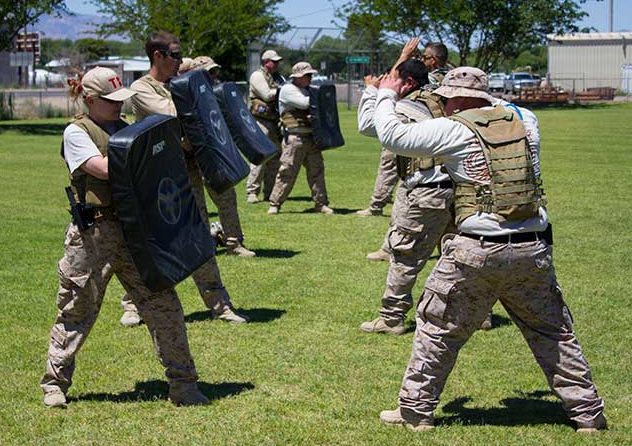 Brooke Curley Photo/Gila Valley Central: In this May 24, 2017 photo, TSU officers work in pairs, practicing the use of their new collapsible batons.

Three trainers were present, including Lieutenant Bosco Montez, who said the TSU is like a S.W.A.T. team for the prisons, a specialized unit that gets called out to respond to crises. The TSU is a rapid response team reacting to situations such as large-scale inmate transfers, prison disturbances or riots.

Driver said corrections officers are experts in less-than-lethal tactics since, unlike police, the officers are locked into a prison without firearms to control situations. Only TSU officers will carry the ASP, which is one of the more forceful tools available to TSU officers. However, Driver emphasized that it is not the only tool officers have. Officers should follow the standardized use-of-force continuum and use the lowest level possible, escalating force only as necessary.

“Absolutely the first and primary weapon that we have, sometimes referred to as a weapon but is a tool, is our officer’s presence, professional demeanor and vocal commands,” Driver said. 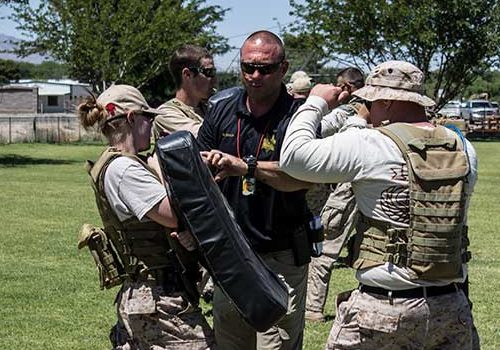 Driver said officers also rely on pepper spray, which is less forceful than the baton, but that changing circumstances may mean pepper spray is unsafe or ineffective. He said any use of force must be commensurate to the threat. The baton is an undesirable but potentially necessary solution to conflict.

According to Driver, the ASP is mainly a defensive weapon that can be used for self-defense or to defend another officer or inmate.

“Say an inmate struck at an officer, they can deflect that blow with a baton without, you know, just using their hand and injuring their hand if the inmate had a weapon,” Driver said.

Regardless of the situation, the priority for the TSU is to safely and effectively regain control of the facility.

Brooke Curley contributed to this article.