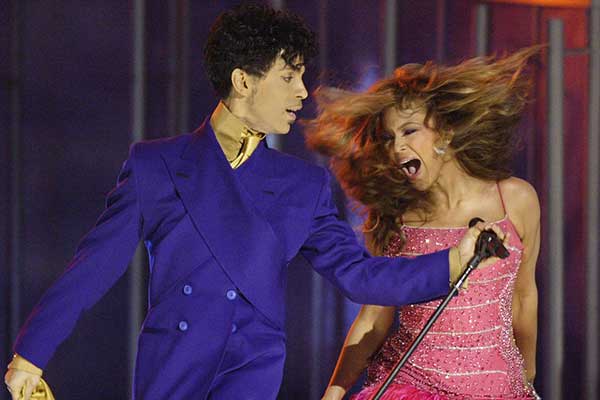 NEW YORK (AP) — On his own, Prince was a revolutionary recording artist and one-man band.

But the nearly-40 year career that ended with his death Thursday was hardly a private party. The other half of his musical legacy were his many collaborations and contributions, whether joining Stevie Wonder on stage in Paris for a spontaneous jam of “Superstition” or writing such future hits as “I Feel for You” and “Manic Monday” and giving them to other artists.

In an industry where collaborations with other artists and credits are negotiated as heavily as world treaties, Prince followed only one credo when it came to working with others: the love of the music.

“Oh yes, he loved helping other people,” said his friend and former fiancee Sheila E., “and helping people by saying, ‘Hey, here’s a song you might want to do or like, I think this fits you, or you know come into the studio and see if we can work together.’ ”

In recent years, he boosted singer-songwriters such as Judith Hill, Lianne La Havas, Esperanza Spalding and Liv Warfield, and recorded singers like Rita Ora. Kendrick Lamar was among the many who traveled to Paisley Park for his famous late-night jams.

Among the countless tributes to Prince over the past few days were stories of his generosity and inspiration. On her Facebook page, Erykah Badu shared a litany of memories “That time Prince was your rhythm guitarist then sent you the picture. The time Prince was so gracious to come to your club in the hood of South Dallas and play for 4 hours into the night…The time you recorded ‘Today — the earth song’ at Paisley Park. All the times y’all shot pool and argued over religion.”

Ken Ehrlich, the veteran producer of the Grammy Awards, told The Associated Press about luring Prince to the 2004 ceremony, where he would memorably team up with Beyonce on “Purple Rain” and “Baby, I’m a Star.”

“I had asked him on several occasions before. I had never had much success,” Ehrlich said. But as soon as he heard he would perform with Beyonce, Prince replied, “I’ll do it,” the producer said.

Prince called him and asked that they meet at a rehearsal hall in Los Angeles.

“In one day, he had laid out the entire medley” that he and Beyonce would perform, Ehrlich said.

“He put his guitar down, and he looked at me (with) a ‘look what I did’ smile,” the producer recalled. “It was like a school kid showing off for the teacher.”

Singer Kandace Springs told the Associated Press that she was contacted by Prince a couple of years ago through Twitter after he saw a YouTube video for her cover of Sam Smith’s “Stay With Me.” Skeptical at first that the encouraging notes really were from Prince, she was on a plane to his home in Paisley Park within days and was asked to close his 30th anniversary concert for “Purple Rain.” At the time, she said, she was being encouraged to take on an urban hip-hop sound, but she considered herself more of a jazz artist.

“He spoke straight into me, ‘You need to be who you are, not be what some other people tell you,’ ” she recalled.

Prince was so prolific a songwriter that demos or B-sides became hits for others, often by design. Cyndi Lauper and Mitch Ryder covered “When You Were Mine,” an aching love song originally on the flip side of Prince’s single “Controversy.” Prince wrote Sheila E.’s signature hit, “The Glamorous Life,” while an early song he worked on, “I Feel for You,” became a smash for Chaka Khan. “Nothing Compares 2 U” was Sinead O’Connor’s biggest hit. For the Bangles, he wrote one of their biggest hits, “Manic Monday,” under the pseudonym “Christopher.”

“(Prince) really liked our first album,” the Bangles’ Debbi Peterson told MTV UK in 1989. “He liked the song ‘Hero Takes a Fall’, which is a great compliment, because we liked his music. He contacted us, and said, ‘I’ve got a couple of songs for you. I’d like to know if you’re interested,’ and of course we were.”

Sometimes, just a phone call was enough. In the early 1980s, Stevie Nicks was working on her solo album, “The Wild Heart.” The Fleetwood Mac singer had heard Prince’s “Little Red Corvette” on her car radio and loved it so much she decided to write an answer song, “Stand Back,” which became a Top 5 hit in 1983. While in the studio, she came up with a crazy idea: Call Prince himself to help out.

“I said, ‘Prince, this is Stevie Nicks, and I wrote a song to your song ‘Little Red Corvette,’ and we’re at Sunset Sound right now, and I was wondering — first of all, I wanted to tell you that I’m giving you 50 percent of (the royalties) it if it ever goes anywhere, but are you in town?'” Nicks told MTV.com in 2009. “If you are, how would you feel about coming down and playing on it?’ Never in a million years did I think this man would be like, ‘I’ll be right there.’ He was there in 20 minutes and he played (she mimes instrumental parts of the song on ‘Stand Back,’) and he was there an hour and a half, and then he left.”