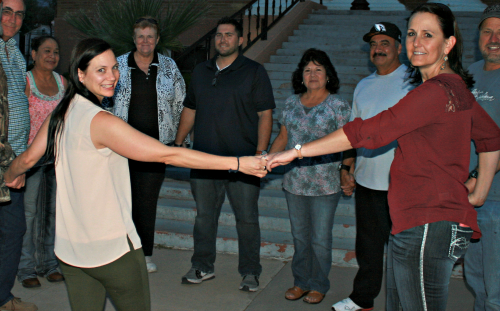 SAFFORD – To stand together or alone, the important thing is that you stand. Individuals in a monthly substance addiction prayer circle are standing up to raise their voices in prayer.

That’s what occurred Sept. 6, as a the prayer circle gathered at the Graham County Courthouse in Safford. The circle is a group of individuals banding together in prayer for those in the community struggling with drug addiction. Roughly 12 individuals showed up for the September prayer meeting, however, the number of attendees change depending on the day of the prayer circle.

Jenny Howard, one of the leaders of the group, said she was inspired to create the prayer circle one morning after her husband had a conversation with their son.

“My son was sent to rehab in Tucson,” Howard said. “He’s at the Salvation Army. And one morning he talked to his dad, and after the conversation, I feel like the lord spoke to me (and said) that we need to pray for him to lift the shadow of drug addiction off the Gila Valley. Hopefully, we can have more unity in the community to help get us through this disease. We’re number two in the state for drug-related deaths per capita in the state of Arizona, so it’s not a happy place here to a lot of people. A lot of families are being torn apart. Lots of kids are dying; parent’s are dying; families are dying and we need to step up and do something about it.”

Chris Taylor is one of the members of the prayer circle. Taylor, who is the executive director of Desert Eagle Addiction Recovery,  is also one of the many individuals striving to lift the shame from the disease of addiction by urging anyone struggling with the disease to seek out the help they need.

“There’s a lot of people who want to help in the community,” Taylor said. “We’re trying to change the perception and stigma surrounding addiction, to let people know that people do recover. If you don’t lose hope, you’ll never be a failure. It doesn’t matter how many times you try and fail, as long as you keep trying. I promise that things will get better; I know that. I see that in so many people’s lives. That’s what all of this is about; just to be here as a community and come together and not live in shame anymore. It’s not shameful to have an addiction, it’s a disease.”

The next prayer circle will be on the courthouse steps Oct. 5 at 6 p.m. All who can come are welcome. The prayer circle also has a Facebook page called, He Will Break The Chains.