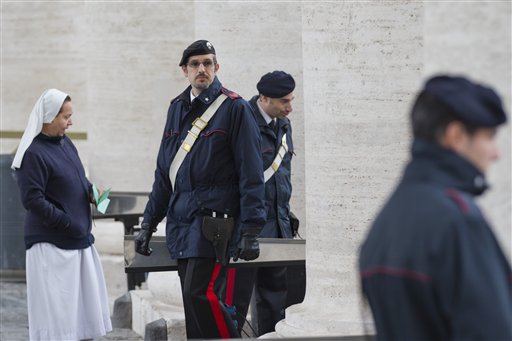 VATICAN CITY (AP) — Pope Francis’ personal security detail was nearly doubled during his general audience Wednesday, and carabinieri were out in force as Italy and the Vatican beefed up security around the Holy See following the Paris attacks and before Francis’ big Jubilee Year starting Dec. 8.

Already, Italy is banning drones and closing the airspace over Rome for Jubilee celebrations, during which millions of pilgrims are expected to descend on the Italian capital. Rome’s prefect, Franco Gabrielli, said Wednesday that law enforcement authorities were prepared to shoot down unauthorized drones and ultralight aircraft if they violate the airspace ban.

The Italian government has deployed 700 extra soldiers for the capital, adding to the 24,000 police officers usually in place, and on Wednesday launched a special emergency call number for the Jubilee. In response to the Paris attacks, Italy also raised its security level and increased patrols at airports and train stations, specifically for trains heading to and from France.

On Wednesday, Francis was surrounded by nearly 20 dark-suited bodyguards during his tour through St. Peter’s Square aboard his open-sided popemobile, more than the normal 12 who usually jog alongside him. At each of the two main gates to the square, six or eight carabinieri guards checked pilgrims with wands and searched bags, more than usual.

After Francis finished, carabineiri patrol cars constantly looped along the main boulevard leading to the square, even though the number of pilgrims who attended the audience was low — part of the typical pre-Christmas lull in attendance.

“Despite what we know is happening, we felt very safe,” said Jean Mines, from Casa Grande, Arizona, who was visiting on a parish-organized pilgrimage.

Middle school teacher Angela Cappone, who brought students to the audience from Lorsarno, Calabria, said some mothers worried about allowing their children to go on the trip, “but we encouraged them to let them come. We can’t succumb to the logic of fear.”

Francis himself alluded to the security situation in his remarks to the crowd of about 20,000, saying the church must always keep its doors open.

“There are places in the world where you still don’t have to lock your doors, but there are so many other places where the doors are barred shut, and where that has become normal,” he said. “We shouldn’t give in to the idea that we have to use this system, which is also for security.”

“Please, no armored doors in the church,” he said. “Nothing. Open doors.”