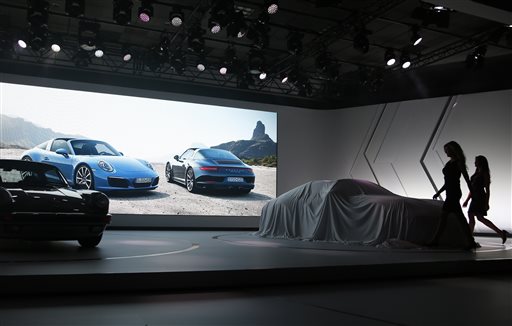 Updated versions of big sellers like the Ford Escape, Nissan Sentra and Hyundai Elantra are there, as well as new luxury vehicles like the Alfa Romeo Giulia sedan, the Cadillac XT5 SUV and the Land Rover Evoque Convertible.

There’s some flash, with the Porsche Cayman GT4 Clubsport race car, and some hints of the future, with concept cars from Volvo and Subaru and a three-wheeler from startup Elio Motors.

Automakers are showing off in California because it’s a hot market. It leads other states in new vehicle sales, according to IHS Automotive, and sales there are expected to hit their highest level in a decade this year.

Here are some of the hot cars at this year’s show, which opens to the public Friday:

KIA SPORTAGE: The Sportage compact SUV gets a totally new look for 2017 with engine and suspension updates to give it better performance and greater efficiency than the outgoing model. It’s got more headroom, legroom and cargo space than the old model, too, because it’s slightly longer and Kia engineers used “clever packaging.” Outside, the Sportage gets a sleeker appearance with curves, creases and a sloped roofline. The company says the interior has more soft touch materials for a luxury feel. The SUV also gets automatic braking and lane departure warning for safety. Electronic upgrades include a 7-inch touch screen that’s compatible with Android Auto and Apple CarPlay. Price wasn’t announced, but the old model starts at just over $22,000.

RANGE ROVER EVOQUE CONVERTIBLE: SUV convertibles haven’t had an easy time of it. Remember the Nissan Murano CrossCabriolet? It was yanked from the market after only four years because of slow sales. But Land Rover is giving it a whirl with a convertible version of its Evoque compact SUV. Land Rover says the fabric roof can stow in 18 seconds and fully raise in 21 seconds at speeds of up to 30 miles per hour. There’s also a rollover protection system that can deploy two aluminum bars within 90 milliseconds of a crash. The Evoque Convertible will go on sale in mid-2016 at a starting price of $50,475.

NISSAN SENTRA: After four years on the market, Nissan’s nondescript Sentra compact car gets a big facelift designed to make it look more sporty like its larger cousins, the midsize Altima and full-size Maxima. For 2016, the compact gets new fenders, hood and front and rear fascias, as well as new wheels. The interior is revamped with a new center cluster and audio display, a new console and refined seat fabrics, the company says. It’s still powered by Nissan’s 1.8-liter four with a continuously variable transmission or six-speed manual. Base model starts at $16,780. Goes on sale in late December.

BUICK LACROSSE: General Motors hopes an all-new Buick LaCrosse will juice sales in the slow-selling full-size car segment. Like most new GM models, the LaCrosse gets longer, lower and lighter than the outgoing version, with more interior space. The 2017 loses 300 pounds due to lighter high-strength steel and lower-mass sound insulation. The car gets GM’s new 3.6-liter, 305 horsepower V6 engine with an eight-speed automatic transmission. The engine also will cut off at stop lights and go to four cylinders on the highway to save fuel. The car gets a nicer interior with an 8-inch touch screen that can handle Android Auto and Apple CarPlay. Goes on sale early next summer. Price wasn’t announced but the old one starts at just over $31,000.

ALFA ROMEO GIULIA: Fiat Chrysler’s Alfa Romeo brand jumps into the midsize luxury sedan market with the Giulia. The Italian-made car with the trademark triangle grille, hood creases and beefy-looking exhaust comes with a Ferrari-derived 2.9-liter, 505 horsepower twin-turbo V6 that takes the car from zero to 60 mph in 3.8 seconds. Alfa says the new rear-drive sedan has near-perfect front-to-rear weight distribution for crisp handling. Initially it comes only with a six-speed manual transmission. Production begins for North America late in the second quarter. The Giulia will start around $70,000.

CADILLAC XT5: The first of four new crossover SUVs that finally will give General Motors’ struggling luxury brand entries in the hottest part of the global auto market. The XT5 is slightly smaller than the aging SRX it replaces, yet it has more interior room. The company says use of unique laser welding techniques and lighter-weight, high-strength steel help make the five-seat crossover 278 pounds lighter than the outgoing model. That makes it more agile. In the U.S., the 2017 XT5 gets an all-new 310 horsepower 3.6-liter V6 with an eight-speed automatic transmission. It looks similar to the SRX but it’s rounded without the severe angles of the old vehicle. Pricing wasn’t announced, but the SRX starts at $36,600. Production starts in the spring.

HONDA CIVIC COUPE: Honda’s new two-door Civic Coupe is the second in a series of Civic variants coming to the U.S. over the next 18 months, including a five-door hatchback. The Civic Coupe has a sportier ride and styling and a quieter, more refined interior. It’s more spacious inside, with an added five inches of rear legroom. New options include Apple CarPlay and Android Auto capability. Under the hood are two more powerful engines: a 158-horsepower, 2-liter four-cylinder and the Coupe’s first turbocharged engine, which gets 174 horsepower. Both get an estimated 35 mpg in city/highway driving. The 2016 Civic Coupe goes on sale in March. Coupe pricing wasn’t announced, but the 2016 sedan starts at $18,640.

FIAT 124 SPIDER: Fiat gets away from cute, bulbous and tiny with an Italian-designed two-seat sports car. The low-slung convertible has some classic looks of its predecessor from nearly 50 years ago, but it comes with many modern updates. The rear-wheel-drive roadster is powered by Fiat’s venerable 1.4-liter turbocharged engine that puts out 160 horsepower. It comes with six-speed manual or automatic transmissions. Price wasn’t announced. It arrives at dealers in the summer.

LINCOLN MKZ: The 2017 Lincoln MKZ is getting an updated look and a big increase in power. It’s the first production model to drop the brand’s polarizing grille — which looked, to many, like the mouth of a baleen whale — in favor of a new design that debuted on the Continental sedan concept earlier this year. The new grille is a mesh made up of repeated, rectangular Lincoln logos; it has an elegant, mid-century modern look. Under the hood is a new, Lincoln-exclusive 3.0-liter V6 engine with 400 horsepower; that’s a 100-horsepower increase from Lincoln’s current top-of-the-line V6. A hybrid is also available. The MKZ also has new technology, including an adaptive cruise control system that can work in stop-and-go traffic and a high-end audio system. The 2017 MKZ goes on sale in summer 2016.

FORD ESCAPE: Ford’s small SUV, which got a major redesign in 2013, gets some updates for the 2017 model year. The new Escape has a wider, trapezoidal grille to match its bigger sibling, the Ford Edge. For fuel savings, it has two new EcoBoost four-cylinder engines — a 180-horsepower 1.5-liter and a 245-horsepower 2.0-liter — and stop-start technology, which automatically shuts off and restarts the engine at stop lights. The Escape is the first vehicle with Sync Connect, which lets users do multiple tasks through their phones, including unlock their doors and remotely start the car at the same time each day. new Escape goes on sale in summer 2016. Pricing hasn’t been announced.