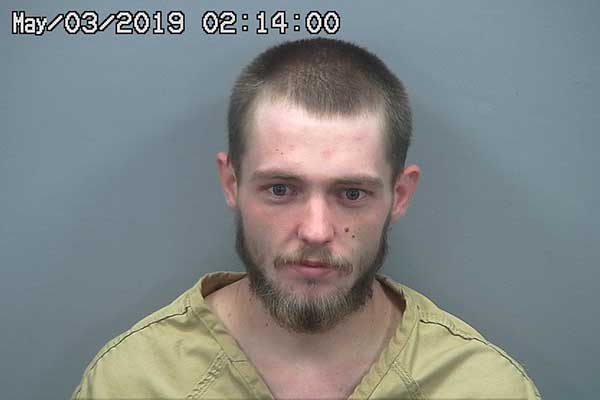 SAFFORD – Authorities were dispatched last Thursday around 11:45 pm to the Mt. Graham Apartments where a woman had reportedly been assaulted by a man in her apartment and then had taken off. Officers arrived and searched the area with a Noptic thermal camera. They could see what appeared to be a person crouched down by the canal in the bushes. An officer located the man, who was identified as Clayton Rackley, placed him in handcuffs and sat him in the back of the patrol car.

When police went to make contact with the woman at her apartment, it took several times knocking and announcing their presence before the woman would open the door for the police. When the woman was asked about the events of the night, she stated Rackley had come to her apartment wanting a place to stay, but she had told him that he couldn’t stay. The victim then stated Rackley had forced his way into the apartment, knocking her down and had taken $20 off of the table and left. The victim told police Rackley had been staying with her about two weeks ago.

When authorities asked Rackley about what had taken place, he reported having an on and off again relationship with the victim. Rackley said that the victim was upset that he was moving around too much and she could not go to sleep and had told him to sleep on the couch. Rackley then stated the victim came out and started yelling at him about tweezers that were missing out of the bathroom, which then started an argument.

Rackley claimed the victim called police because she knew he had warrants. Rackley reportedly told authorities he tried to leave before the police arrived, but the victim blocked the door and tried to prevent him from leaving before the police came. Rackley stated the victim blocked the door, but he was able to get past and ran and hid by the canal where he was found. Rackley denied taking $20 off the table and when he was searched, police did not find any money in his possession. Authorities had found a backpack sitting outside the victim’s door that Rackley claimed was his and stated the victim must have thrown his stuff out after he left.

Because of the conflicting stories, Rackley was booked into the Graham County Jail only on his outstanding warrants.