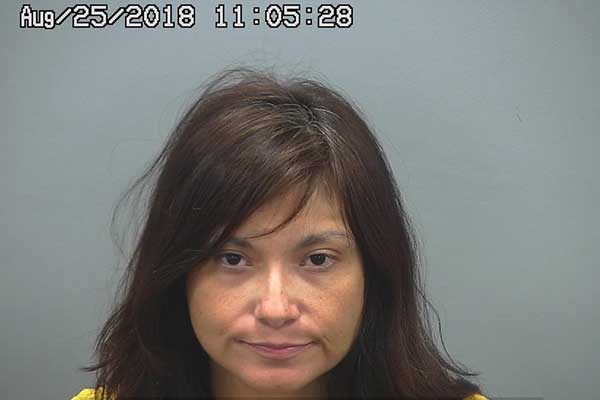 SAFFORD – Police responded to a residence on 16th Street in Safford last weekend in reference to a disorderly woman. When the officer arrived, the woman had already left the residence. The reporting party told the officer that if he made contact with the alleged disorderly woman, to tell her that she was not welcome on the property.

The officer located the woman a short distance away, trying to hide behind a covered driveway post. When the officer made contact with the woman, she told him that she had gone to the house on 16th Street to retrieve some clothes. The officer told the woman that she was not welcome at the residence but offered to take her back there, so she could retrieve her clothes.

The officer opened the rear passenger door and took hold of Archuleta’s arm, advising her that she was under arrest for the warrant. Archuleta reportedly began screaming and stepped out of the patrol vehicle. She tried to pull away from the officer, but he was able to place her in handcuffs. Archuleta was apparently wearing a strap purse over her shoulder at the time of the arrest and the straps were caught between her two handcuffed arms. Due to her behavior, the officer left the purse handcuffed to her arms.

While enroute to the jail, Archuleta reportedly asked the officer what would happen to her purse at the jail. She said that her ex-boyfriend might also have property in her purse that did not belong to her. The officer asked if she thought there might be something illegal in the purse. Archuleta said that she wasn’t sure but that she was concerned because her boyfriend uses meth.

The contents of the purse were searched at the jail but nothing illegal was found. The jail refused to take custody of the purse. Archuleta requested that the officer take the purse to her father’s house. As he was leaving the jail facility, the officer was called back to the booking room. Jail officials advised the officer that they had found a glass pipe in Archuleta’s pants pocket. The pipe had residue in it and is commonly used to smoke methamphetamine.

Archuleta denied the pipe was hers and claimed that the pants she was wearing did not belong to her. She told authorities that she was homeless and had put the pants on early that morning while at the residence where she was accused of causing a disturbance. While admitting that she does smoke meth, she denied knowing the pipe was in her front pants pocket.

Based on Archuleta’s nervousness about what might be found in her purse, her admission to being a meth user, and wearing pants with the glass pipe in the pocket, authorities concluded that she did knowingly bring drug paraphernalia into the jail facility. Archuleta was booked for possession of drug paraphernalia and promoting prison contraband.