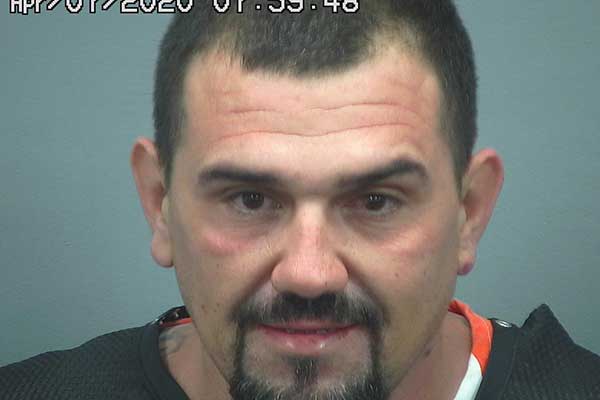 Safford police were dispatched to a trailer park east of Safford at about 3:30 am on Tuesday, March 7, 2020, regarding a family disturbance in a 5th wheel parked in the trailer park. The reporting party said that a man and woman were yelling at each other and two small children were crying outside. The caller said that the woman might have left the area on foot.

When officers arrived, they found a cell phone lying in the gravel outside the door. The trailer reportedly had security cameras on all sides. While standing outside the trailer, authorities could hear kids inside crying and somebody trying to hush them. The officers knocked and announced themselves several times with no response. Based on their duty to make sure everything was okay and the kids were safe, an officer announced that they would breach the door if nobody opened it for them.

After repeatedly knocking and announcing with no response, an officer used a breaching tool and sledgehammer to force the door open. A man inside the trailer began yelling at the officers and acting aggressively toward them. Police ordered the man, later identified as Steven Mabus, to come outside and turn around but he refused and pulled the door shut.

Officers pried the door open again and tried to pull Mabus outside, but he managed to pull away and step back inside the trailer. An officer drew his taser and ordered Mabus to get down. Instead of complying with the order, Mabus took an aggressive stance toward the officer. The officer fired the taser into Mabus’ chest area but it was not effective. Mabus broke the wires and tried to push the officer back. The officer forced Mabus to the floor. Mabus landed with his arms underneath him and would not give them up. After delivering a drive stun with his taser, the officer was able to get Mabus’ left arm and place a handcuff on it. Another officer pulled Mabus’ right arm back and the officers secured the handcuffs.

Mabus appeared to be intoxicated. He was belligerent and continued yelling at police. Dispatch confirmed a felony warrant from Maricopa County. Two small children were huddled on a bed at the front of the trailer and were visibly upset. Mabus told authorities that he did not allow them in his house. Authorities tried to explain why they breached the residence, but Mabus refused to listen and continued to yell loudly.

After confirming the warrant, Mabus was placed under arrest and searched. A large quantity of Heroin was found in his front pocket. A large amount of cash was also in view inside the trailer. He told police that the drugs and cash belonged to him. He agreed to let them search the trailer. No other drugs or paraphernalia were found. The Heroin weighed in at 20 grams.

In addition to the warrant, Mabus was also arrested for possession of narcotic drug for sale and possession of drug paraphernalia. He was transported to the Graham County Jail. During the booking process, Mabus made multiple statements that he would assault the police officer. He was moved to a different room away from the officer and booked without further incident.