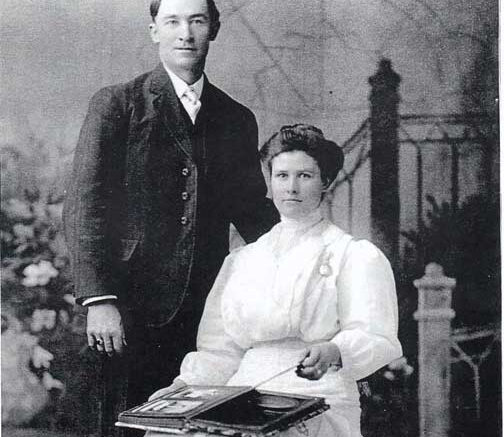 Hyrum Wesley Crockett was born in Salem, Utah, 24 June 1877, a son of Wilford Woodruff Crockett I and Mary Mahala Reed Crockett.  The family relocated to Arizona and Pima in 1883, where Hyrum grew up and became known as “Hite”.

As a youth, he did the many chores of one growing up on a farm and in a rural area, such as herding cows, irrigating, hoeing weeds, etc.  He was taught early to work hard—and to do it right the first time or his mother would take him to do it over.  As he hated the taste of soap, he learned early to never use bad language.  From both parents he learned to always speak kindly of others and treat the elderly with respect.

In 1896-98 his father served a mission in Boston and Maine—the first missionary called by The Church of Jesus Christ of Latter-day Saints from the Gila Valley.  He visited his birthplace of Vinalhaven, Maine where he passed his 56th birthday.  While he was away, Hite and his two brothers, Wilford Woodruff II, &David Owen, built a red-brick home on their lot in Pima.  These three boys had ten sisters, with five dying as infants.

Hite spent a few years in Clifton-Morenci working at Milt Lines’ Dairy and was an avid player on the Morenci Baseball Team.  He also spent a few years in Mesa working.  In 1906 at age 29 he was called on a mission to the Southern States—returning home a year later after contracting typhoid fever.

It was during this time that Elizabeth, known as “Lizzie,” worked in various homes in Pima; one of them being the Crocketts.  Years later Lizzie confided to daughter, Dorothy, that one day Hite’s mother had commented that when Hite returned, he was going to “need” to get married; whereupon Lizzie stated she would marry him.  Elizabeth was born in Matthewsville 13 Oct.1889 to Thomas Norman Lamb and JanettaFerrin Lamb.

Upon his return, Hite went to the socials and dances and was the most eligible bachelor.  Not only was he good looking, but a steady, dependable worker. Elizabeth caught his eye, as he thought she was the prettiest girls there.  He asked to take her home.  She was living with her grandmother, JanettaMcBride Ferrin and from that time she did not go with anyone else.  Sep. 24, 1908, taking all day to travel to Solomonville and back in a buggy where they got their marriage license and that night at the home of his parents, Bishop Philemon C. Merrill performed the marriage ceremony.

A few days later, they, accompanied by his mother, his sister, Retta & husband Roderick Williams, went by train to Salt Lake City, Utah where they were sealed in the temple of The Church of Jesus Christ of Latter-day Saints.  For a time, they lived with his parents.  Then they bought the “white rock schoolhouse” just west of his parents’ and converted it into a home where their first three children were born.  They purchased sixty acres on the east side of the road to the river and built their dream home, where they lived out their lives.    A grandson, Lawrence Crockett & wife Edilia, and family live there now.

During this time, Hite worked for John Mattice at his meat market, then he & Reece Green were partners in the meat market and store housed in the old Pima Bank Building which later became the REA, currently the Eastern Arizona Museum.  His days were long, putting in a “second shift” on their farm; raising grain, corn and hay, also planting fruit trees and vegetables and having cows to milk.

They were both active in church and community affairs.  He was a town councilman and a school trustee.  He was Sunday School Superintendent and YMMIA President, also served two years as counselor to Bishop Charles E. Ferrin and seven years as counselor to Bishop Reece Green.  At the time of his death, he was a counselor in the High Priests Quorum Presidency of the St. Joseph Stake.  He was only 56 when colon, liver and gall bladder cancer took his life April 13, 1934.

Elizabeth & Hite had a family of 12 children, with a young son, Clayson Reed (4 ½) dying in Nov. 1918 of the flu.  At the time of their father’s death, Emil & Retta were married, which left 9 at home, the youngest only two.  Lizzie became a widow at age 43 and lived another 43 years, raising her children—serving them and the community.  She ne4ver learned to drive an automobile, so walked where she wanted or needed to go, often pushing a stroller with others trailing behind.  She was a faithful Visiting Teacher for 60 years.

This couple, just as countless others, left a great posterity who contributed much to the building up of the Gila Valley; many still make their home here.  Both Hyrum & Elizabeth rest in the Pima Cemetery.  Their chidren are:

These and other individual and family histories may be found at the Eastern Arizona Museum in Pima.  Open Thursday-Saturday 10:00 -3:00.