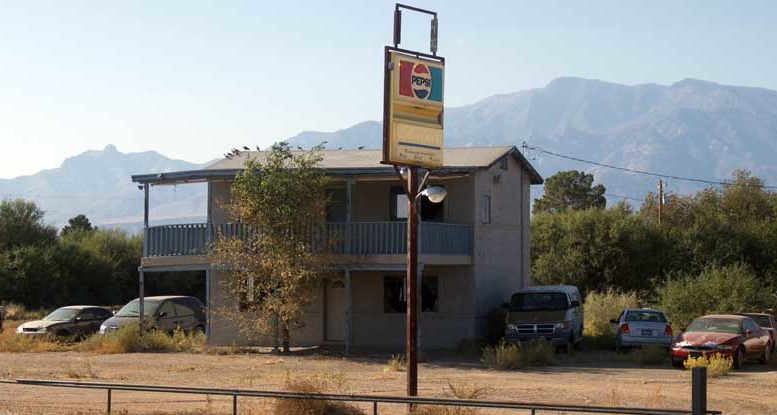 Jon Johnson Photo/Gila Valley Central: Pima is looking to turn this abandoned car lot eyesore into a gleaming manufacturing building with offices as part of its economic development plan.

PIMA – Traveling along U.S. Highway 70 through Pima one sees a mixture of businesses, residences, and municipal buildings. One also sees the blight of run-down areas that haven’t been operational in years. It is that blight that Town Manager Sean Lewis hopes to change, and by doing so change the perception of Pima. And perception is key. 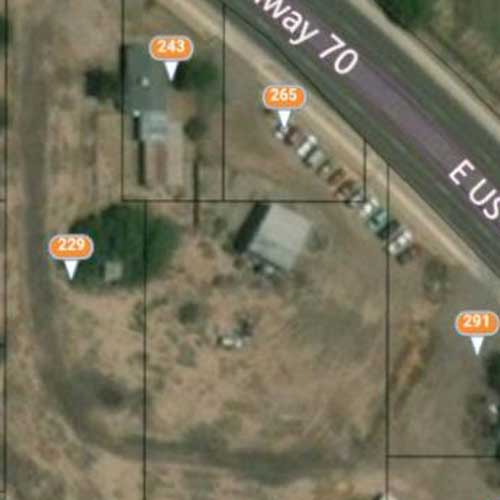 Pima is purchasing this property with the exception of the rental house. It will be the site of a large manufacturing/warehouse building with offices.

Lewis, with the support of the Pima Town Council, has begun the process to purchase four lots on the old Graco car lot property and will then build a metal manufacturing/warehouse building roughly 100 feet by 80 feet with a second story to house offices. The building is a pre-fabricated copy of the Open Loop Energy Inc. building north of Safford, with the exception that Pima’s building will also have three separate offices on one side. Lewis said the move will immediately improve the town by cleaning up an eyesore on the highway and replace it with a facility the town can be proud of.

“That area is our biggest open commercial lot in our commercial zone with highway frontage in Pima and it’s currently a major blight on our town,” Lewis said. “For Pima residents, it looks bad and for people traveling through Pima, it looks bad. There’s a halfway burnt-down building and a bunch of weeds and a bunch of old cars. It gives the wrong impression of what we want people to see Pima as.” 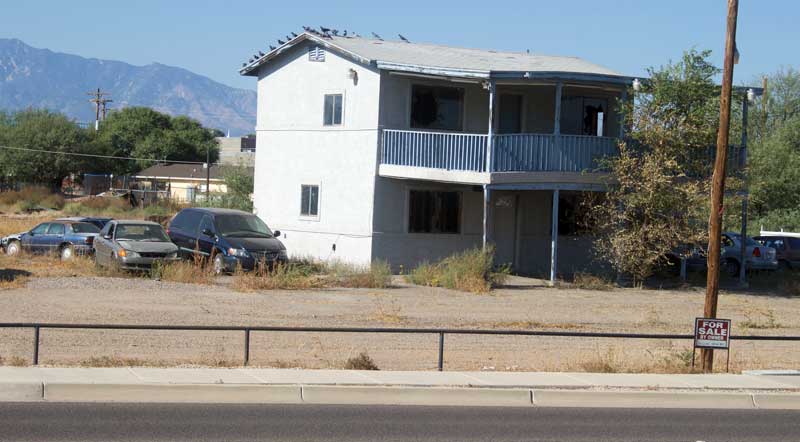 Jon Johnson Photo/Gila Valley Central: The current state of the property is run-down with abandoned buildings and cars.

The lots at 229 and 265 E. U.S. Highway 70 are roughly three acres in size. With a unanimous vote by the council at its Tuesday night meeting, Lewis purchased the land for $115,000 and it is currently in escrow. Enabling the purchase was sort of a land swap if you will, as cash for the Graco lot was put into the town’s coffers when it recently sold some desert land across from the cemetery in a sealed-bid auction for $78,650. 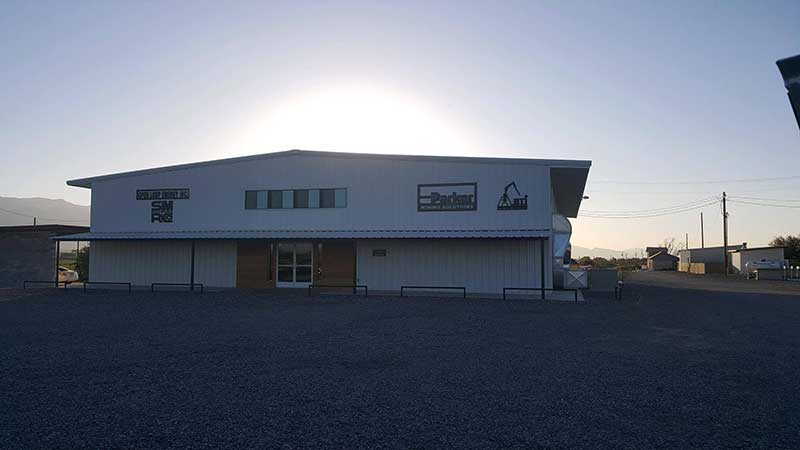 Contributed Photo/Courtesy Sean Lewis: The new building will be a copy of this Open Loop Energy Inc. building but with three additional offices on one side and a faux rock finish on the exterior.

The metal shell will cost the town $50,000, and to finish the building with electric, plumbing, and other items will bump the town’s total investment in the land and facility to $215,000 with $136,350 coming out of pocket thanks to the cemetery land sale. Pima will also generate income for other local businesses because all aspects of the facility build except for the shell itself will be performed by local businesses, according to Lewis.

But a giant industrial complex only satisfies one prong of Pima’s intentions if there is no business to utilize it – enter Optimal Health Systems (OHS). 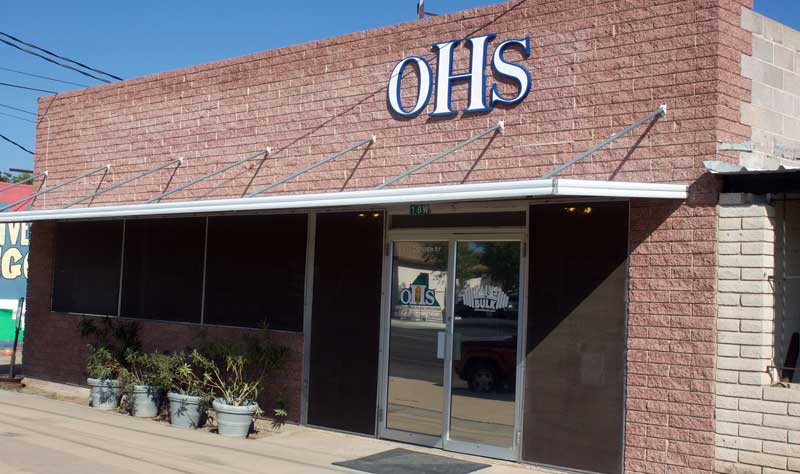 OHS owner Doug Grant told Gila Valley Central that his business is bursting at the seams at its current location basically down and across the street. OHS has operated in Pima since 2003 and was previously located where New Insulation Concepts now resides.

“We’ve been needing to build a larger facility for years now and have been looking where we could do it and stay in Pima,” Grant said.

OHS is a whole-food nutrition company that services a variety of people, including athletes, doctors, and people just wanting to improve their health, according to Grant. 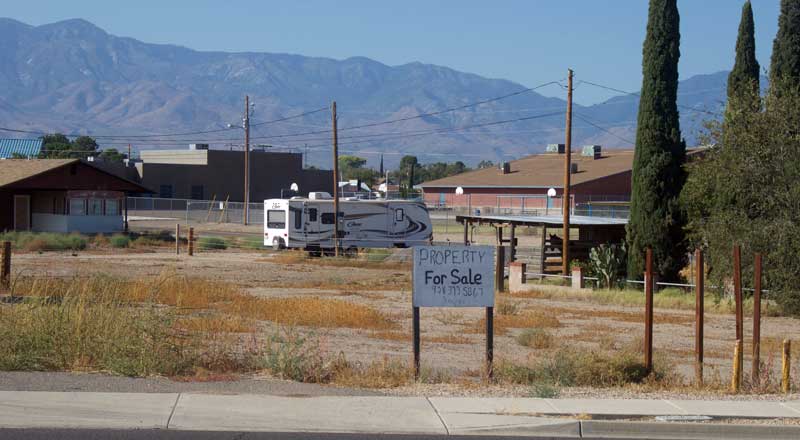 Jon Johnson Photo/Gila Valley Central: The long, narrow side of the lot will be turned into a driveway for semi-truck and other deliveries and exports so the vehicles won’t have to park on the street.

OHS currently has about 20 employees and will likely increase to 35 to 40 employees in the first year at the new location, according to Grant. As well as new local jobs, Lewis said OHS is one of Pima’s largest sources of sales tax revenue and could breach the top with the new facility. Grant added that along with sales tax it is also one of if not the largest shipper in Pima and utilizes the U.S. Post Office and UPS to ship hundreds of boxes each week.

“We try to help out and do as much as we can for the school here and the area,” Grant said. “It’s nice to kind of work together.”

With comparably small walk-in traffic compared to its main shipping sales, OHS could conceivably move just about anywhere in the Gila Valley and continue operations. Keeping that tax revenue in Pima while creating a larger economic opportunity for the town was paramount in Lewis’ desire to make the deal happen.

The town is proposing a 10-year lease for the main building to OHS and while terms were not yet released because the lease hasn’t been signed, Lewis said the town would recoup its out-of-pocket costs within four years and total investment within six years through the lease of the main building alone. While most of the work will be paid for by the town, OHS will put on its finishing touches, including an attractive facade, landscaping, and paint.

Additionally, there will be three offices available for lease/rent that, if occupied, would shorten that timetable.

Lewis is hoping to possibly have the facility finished by January at the earliest and Grant said he is ready to move in right away.

“It’s refreshing and it’s exciting to work with people who do what they say and do it when they say they are going to do it,” Grant said.

Lewis hopes cleaning up the economic highway corridor will create a domino effect and entice other businesses to take another look at what is available in Pima.

“My hopes, long-term, is that by cleaning that up, by making our highway look better, it’s also a way of enticing other people to come here,” Lewis said. “Right now, our highway is one of our worst attractions. And I want to reverse that. I want to make it our biggest attraction, and I think this is just the first step in making that happen.”