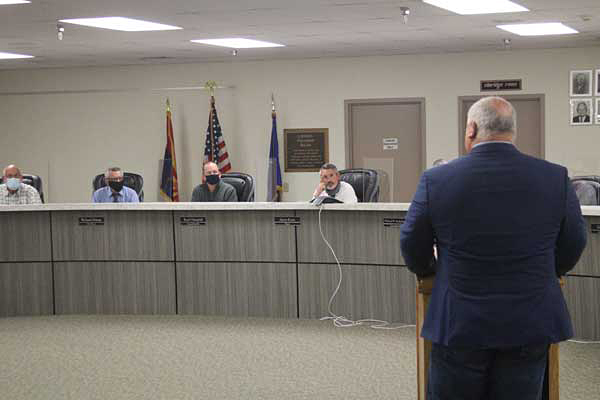 PIMA — The Pima Town Council voted unanimously in favor of a resolution calling for the county to issue a mask mandate.

The council took action during a special meeting Monday.

The Graham County Chamber of Commerce’s board previously voted in favor of a countywide mask mandate, and the Town Council for Thatcher is scheduled to hold a special meeting Tuesday at 6:30 p.m. to consider a resolution calling on the Graham County Board of Supervisors to take action.

Meanwhile during its regular meeting Monday, the Safford City Council agreed to hold a special meeting to act on a similar resolution; however, as of Tuesday, the city had not yet set a date or time for the special meeting and, due to the requirement of 24-hour public notice before a meeting can be held, the Safford City Council will not be able to take action on a resolution before the County Board of Supervisors considers a mask mandate.

“A lot of times people say, ‘Well, Safford is a leader.’ It just so happens we’re not. Thatcher is leading already and Pima is holding a meeting tonight to recommend adoption of a resolution on a mask mandate,” Safford Vice Mayor Richard Ortega said. “The chamber is supporting it, our schools are supporting it. Everybody is supporting it and I think it would be a shame if we, ourselves, don’t take it to heart .”

The Graham County Board of Supervisors is scheduled to hold a special meeting to consider a mask wearing regulation Wednesday, Nov. 25, at 8 a.m.

“I can’t speak for the rest of the board, but I can tell you that I will do everything that I can to persuade the other board members to see if they will join you,” Graham County Supervisor Paul David, D-Dist. 1, told the Safford City Council. “I know that Town of Thatcher and Pima have already indicated that they will be passing resolutions in support.”