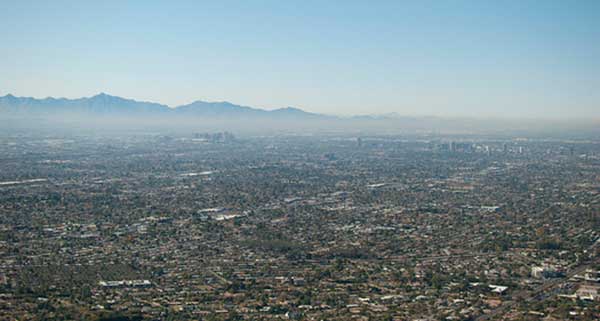 – Phoenix again ranks among the top 10 smoggiest cities in America, according to a report released today by the American Lung Association.

Arizona’s largest metropolitan area is eighth in the nation for high ozone pollution, or smog. The ALA gives Maricopa County a failing grade for ozone, with more than 90 days of dangerous smog levels recorded from 2014 to 2016. Even so, that’s actually a slight improvement over previous years.

Stacey Mortenson, program director for the ALA in Arizona, said the annual “State of the Air” report shows that environmental regulations have made a difference.

“If some of these regulations and limits come off,” she said, “then we’re kind of opening ourselves back to going where we were, instead of seeing the improvements that our report has been showing.”

The ALA said air has gotten continuously cleaner in the United States since the Clean Air Act went into effect in 1970, but the report confirmed there’s much room for improvement. It said about four out of 10 Americans still live in areas where air quality often is unhealthy.

The report warned that exposure to ozone pollution can contribute to early death, nervous-system damage or developmental delays. Mortenson said areas with dense smog or high levels of particulates in the air are especially dangerous for young children or people with asthma or cardiovascular diseases.

“We have the heat and sunlight, no doubt about it,” she said, “and that’s not something that’s controllable, so we do have to look at things that we can control.”

She said individuals can do their part by avoiding burning wood or trash and driving low-emissions vehicles. Dangerous vapors are more likely to escape into the atmosphere in the sun, she said, so even just waiting until after dark to fill your gas tank can keep the air cleaner.

The ALA report is online at stateoftheair.org.