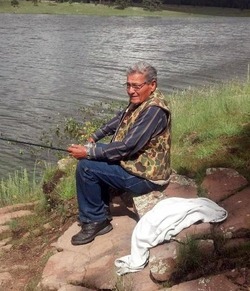 Pete (Pedro) L. Castañeda, 81, lifetime member of Clifton, passed away December 22, 2015 at his home. He was born September 15, 1934 in Metcalf, AZ to Vicenta & Pedro Castañeda. Pete was one of the remaining survivors born in Metcalf and was recognized as such at the annual Baile de Viejos.

He attended schools in the Clifton area and was a graduating member of the Clifton High School class of ‘53. He joined the U. S. Army and served his country honorably. He then went on to the Maricopa Skill Center to learn his trade in welding and worked in the mine as a Boilermaker and Welder.

Pete married Magdalena “Maggie” Chavarria on January 25, 1958 at the Sacred Heart Parish in Clifton and to that union were born three children; John, Yvonne & Jacob. He was a member of the American Legion – Post 28, the Clifton Social Club and a former Clifton Town Council member.

He is preceded in death by his parents, Vicenta & Pedro Castañeda, sister, Rachel Montoya and brother, Ernest (Sorra) Castañeda.

A Memorial Mass will be held on Saturday, January 9, 2016 at 10:00 a.m. at the Sacred Heart Parish in Clifton with interment to follow in the Sacred Heart Cemetery in Morenci with military honors.

Services are under the direction of McDougal’s Caldwell Funeral Chapel and Gila Valley Crematory. Online condolences may be extended at www.caldwellfuneralchapel.com.