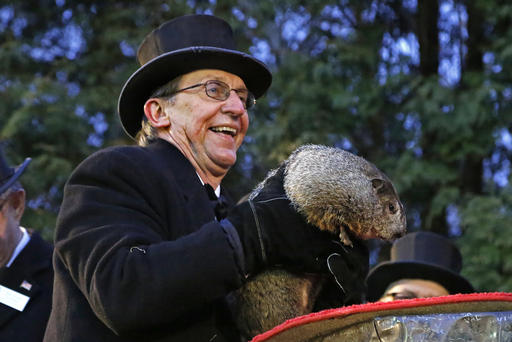 PUNXSUTAWNEY, Pa. (AP) — The handlers of Pennsylvania’s most famous groundhog, Punxsutawney Phil, said the furry rodent has “predicted” six more weeks of winter after seeing his shadow at dawn Thursday.

The top hat-wearing members of the Punxsutawney Groundhog Club’s Inner Circle reveal Phil’s forecast every Feb. 2, based on a German legend surrounding Candlemas. The legend says if a furry rodent casts a shadow that day, winter continues. If not, spring comes early.

In reality, Phil’s prediction is decided ahead of time by the group on Gobbler’s Knob, a tiny hill just outside Punxsutawney about 65 miles northeast of Pittsburgh.

Thousands of people gathered overnight to await the forecast. They were treated to folk music and a Star Wars-themed fireworks display under cloudy skies, with temperatures just below freezing, while they waited.

The groundhog’s prediction is typically contained in a short poem, sometimes referencing current events or — when the nearby Pittsburgh Steelers are participating — a comment on the Super Bowl, which usually follows a few days later.

But this year, Phil stayed on message and didn’t reference football, President Donald Trump or anything other than the weather.

“It’s mighty cold weather, you’ve been braving. Is it more winter or is it spring that you’re craving? Since you’ve been up all night and starting to tottle, I, Punxsutawney Phil, shall not dawdle,” the proclamation read. “My faithful followers, I could clearly see a beautiful, perfect shadow of me. Six more weeks of winter, it shall be!”

Records dating to 1887 show Phil has now predicted more winter 103 times while forecasting an early spring just 18 times — including last year. There are no records for the remaining years.

Phil’s lesser-renowned counterparts in Michigan and Ohio also predicted six more weeks of winter while a rodent in New York played the contrarian.

Buckeye Chuck, designated Ohio’s official groundhog by that state’s General Assembly in 1979 and Woody the Woodchuck in Michigan concurred with Phil’s wintry forecast.

Woody, a female who lives at the Howell Conference and Nature Center in Marion Township, about an hour west of Detroit, doesn’t rely on her shadow. Her handlers say if she emerges from her house and stays out 30 seconds or more, she’s predicting an early spring.