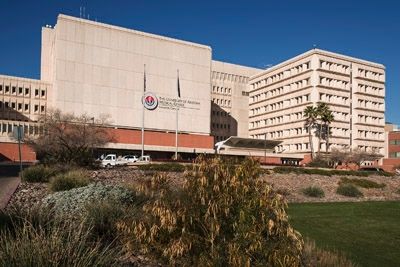 File Photo: A pedestrian was airlifted to this Tucson hospital after being struck while walking in the roadway of U.S. Highway 191 early Tuesday morning.

A man was airlifted to a Tucson hospital early Tuesday morning after being struck by a pickup truck as he walked along U.S. Highway 191.

According to a press release from the Arizona Department of Public Safety (DPS), Patracinio A. Romero, 51, of Thatcher, was walking in the roadway in the northbound lane of U.S. Highway 191 at about 4:45 a.m. when he was hit.

The collision occurred roughly three miles south of Safford in an area with a curve in the highway. Additionally, the area was dark due to the time of day and lack of street lights.

The driver, who was not identified, said he didn’t see the pedestrian until the last minute, according to DPS Media Specialist Bart Graves. The driver said he swerved to avoid Romero, but the corner of his pickup truck still struck him.

Romero was airlifted to Banner – University Medical Center Tucson Campus for treatment in its trauma center. He was last described as being in very serious condition as of Sept. 6.