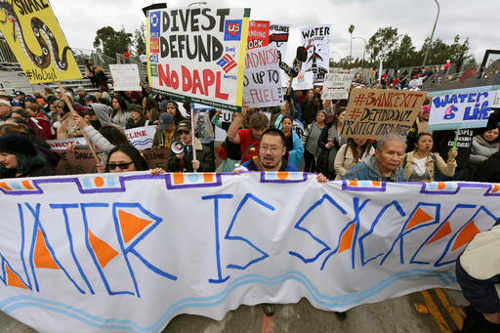 File - In this Jan. 2, 2017, file photo, protesters rally against the Dakota Access Pipeline behind the 128th Rose Parade in Pasadena, Calif. The front lines of the battle against the $3.8 billion Dakota Access pipeline are shifting away from the dwindling encampment in North Dakota. (AP Photo/Michael Owen Baker, File)

BISMARCK, N.D. (AP) — The front lines of the battle against the $3.8 billion Dakota Access pipeline are shifting away from the dwindling encampment in North Dakota, with main opposing groups asking for activism to be spread around the U.S., a call heeded when a banner was unfurled during an NFL game on New Year’s Day.

The message also has evolved from a struggle against a single four-state pipeline to an effort to advance the rights of Native Americans, the leader of the Standing Rock Sioux tribe says.

“The opportunity to build awareness started at Standing Rock, and it’s spreading out to other communities, other areas of the United States,” tribal Chairman Dave Archambault told The Associated Press. “It’s something that the United States, corporate America, the government has taken for granted — the original occupation of Native lands, all the wrongs of the past.”

The protest actions that have popped up, other than the banner drop at a Minnesota Vikings game, include a demonstration at the Jan. 2 Rose Parade in California, bank protests from New York to California and protests of other pipelines in Texas, Florida and Louisiana.

It’s a strategy that sociology professors who study protest movements say is advantageous and possibly allows for innovative ways to draw attention to the issue. A decentralized effort also heeds Archambault’s and other protest groups’ requests for protesters to leave the once-sprawling campsite during the winter months for their safety.

“Those are all examples of what we’re calling for, and some of those things we coordinated,” said Dallas Goldtooth, an organizer with the Indigenous Environmental Network . “The fight isn’t over — it’s just the front line is transitioning to a new place, and that’s a national campaign.”

The demonstrations in other states are examples of how Dakota Access protests are helping highlight other regional issues and broader issues of concerns to Native Americans, such land rights under old treaties with the federal government and the need for state and federal governments to better consult with tribes when it comes to infrastructure projects that affect them, Goldtooth said. The Standing Rock tribe is even considering forming a tribal utilities commission to govern such projects.

Goldtooth’s group, as well as Honor the Earth and the International Indigenous Youth Council , issued a statement Dec. 9 urging people to stop traveling to the camp “and instead take bold action in your local communities.” Since then, the camp’s population has dwindled to between 500 and 800, according to the Morton County Sheriff’s Office, and clashes between protesters and police have dropped off; only 17 arrests since Dec. 9, compared to 568 in the preceding four months.

The pipeline that’s to carry North Dakota oil to a shipping point in Illinois skirts the Standing Rock reservation to the north, where Texas-based developer Energy Transfer Partners plans to lay pipe under a Missouri River reservoir. The tribe and its supporters believe the project threatens drinking water and cultural sites, which ETP denies. The crossing under Lake Oahe is the last remaining chunk of construction, but work is stalled while ETP battles the federal government in court. The Army Corps of Engineers wants more study of alternate routes, potential for a leak and tribal treaty rights.

An aggressive pipeline opposition group known as the Red Warrior Society left the camp last month but remains active orchestrating protests at banks they say have investments in the pipeline and other events in various states including Utah, California, Arizona, New Mexico and South Dakota.

“Energy Transfer Partners will push this pipe through unless there is a diversity of tactics,” the group said last month.

A centralized massive protest has its advantages, according to University of Wisconsin-Madison sociology professor Pamela Oliver.

“(Media) rarely get interested unless an action is either very, very large … or disruptive, or especially, violent,” she said.

However, large encampments can’t be sustained indefinitely, and diversifying targets can be helpful, said Oliver, who has written extensively about social movements. She notes that “in a practical sense, it is reasonable to look for tactics people can use where they live, and that are consistent with also holding jobs.”

James Jasper, a sociology professor at The Graduate Center of the City University of New York who has written several books about social movements, says “you never know what might work,” including “innovative ones that take advantage of the media already present, as at football games.”

That protest involved two people climbing into the rafters of U.S. Bank Stadium during a Jan. 1 game between the Vikings and Chicago Bears and unfurling a protest banner. Charges are pending against three people, including Karl Zimmermann Mayo, who told the media “this pipeline is not ethical.”

Groups protesting the pipeline emphasize they’re not backing down, saying in December that “this fight is escalating” — though for the time being, not in North Dakota.

“We really are seeing this message materialize, to nationalize this fight,” Goldtooth said.

This story has been corrected to show the Rose Parade was on Jan. 2, not Jan. 1.