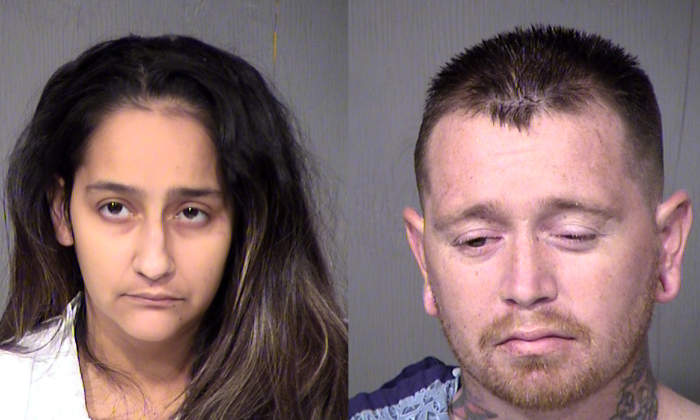 These undated booking photos provided by the Maricopa County Sheriff show Wendy and Kansas Lavarnia. Phoenix police say Wendy Lavarnia and her husband have been arrested following the shooting of their 9-year-old son, who police say remains on life support. Lavarnia told police she placed a loaded gun on a bed within reach of two of her young children while she turned to get a holster and that a 2-year-old shot the 9-year-old. She was arrested on suspicion of four counts of child abuse for allegedly endangering her children. (Maricopa County Sheriff via AP)

PHOENIX (AP) — Police uncovered evidence that blood was cleaned up in a Phoenix home where a mother says her toddler shot and killed his 9-year-old brother, leading to new murder accusations against the parents, according to court documents released Wednesday.

The records also said Kansas Lavarnia, an ex-convict, had a crudely bandaged gunshot wound on his upper arm that looked to have been punctured multiple times, possibly with a screwdriver, to camouflage the injury.

The developments call into question the account of Wendy Lavarnia, who told police that her 2-year-old son picked up her gun and shot the older boy after she had previously let the toddler practice pulling the trigger when it wasn’t loaded.

An updated probable-cause statement repeated the mother’s account but didn’t provide new details on Monday’s shooting. Documents did not say if the couple had attorneys who could speak on their behalf.

“The visual lack of blood, the extent of occulted blood residue, and the lack of soiled and bloody clean up materials implies that a significant amount of time and effort was taken prior to contacting emergency services,” the statement said.

“The amount of clean up evidences could not have been accomplished during the two-minute police response time, and police secured the home after their arrival preventing any subsequent clean up,” the document says.

Prosecutors had not filed criminal charges, said Amanda Jacinto, a spokeswoman for the Maricopa County Attorney’s Office. Judges ordered both held in lieu of $1 million bond each.

The mother previously was suspected of child abuse in the case, while Kansas Lavarnia had been booked on weapons misconduct. He was barred from having a gun in the home because of three 2009 convictions for theft and possession of burglary tools. He completed a three-year prison sentence in 2012.

Kansas Lavarnia blamed his convictions on a longstanding addiction to pain medications, saying he started taking the drugs after he broke his back in an ATV accident when he was 15, according to court records.

He said he was sober from 18 to 21 but later resumed using pain medications. Once such drugs got too expensive, he turned to cheaper illegal drugs, using cocaine and heroin for a few years, records say.

Neighbors of the couple said the children could sometimes be seen outside wearing only a diaper.

Marie Mosley, who lives next door, said they initially seemed nice but she later disapproved of the way they handled themselves around their children.

“Their kids were always running in the front with their diapers on,” Mosley said. “They always yelled and cussed at them, which I didn’t think was right, to cuss at little babies like that.”

Lavarnia’s first conviction stemmed from a January 2009 arrest when he was seen crouched down in a car outside a home where $480 in property had been stolen. The victim recognized the driver as Lavarnia, who used to clean fish tanks for the victim, authorities said.

Seven months later, police say Lavarnia tried to steal a sports car in his apartment complex and used tools in a bid to tamper with the vehicle’s ignition.

A month later, Lavarnia used a friend’s stolen driver’s license to withdraw $4,500 out of his bank account, investigators said. Lavarnia told authorities he was abusing drugs at the time and wasn’t thinking clearly, court records said.