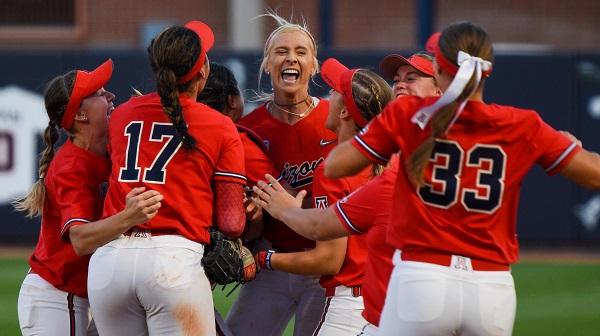 Arizona Wildcats player celebrate after defeating Ole Miss and advancing to the Women’s College World Series. It will be the 23rd time for the program. (Photo by Brady Vernon/Cronkite News)

When second baseman Hanah Bowen’s throw hit Rylee Pierce’s mitt at first base, gloves flew in the air, hugs were exchanged and a weight was lifted off a team’s shoulders. The Arizona softball program, one of the most accomplished in the nation, surmounted the hill that stood in its way for the past eight seasons. With their Super Regional victory over Ole Miss in front of a crowd of 2,835, the Wildcats are headed to Oklahoma City for the Women’s College World Series for the first time since 2010.

Arizona, which owns eight national championships, the second most behind UCLA, endured its worst stretch since the establishment of the NCAA Softball Tournament in 1982. It was an oddity for 34-year head coach Mike Candrea. At one point starting in 1988, Candrea led the Wildcats to 22 Women’s College World Series appearances in a 23-year span.

After five straight seasons of seeing his teams’ seasons end at the Super Regional stage, Candrea is just happy to move on from the topic of the drought.

“We start in September, we work every year for this. Sometimes you can walk away and have this feeling, and sometimes you feel a little bit short,” Candrea said. “Like I’ve said through the week I don’t live in the past, I live in today. And today’s moment, where my feet are, I’m very happy right now for this group of young ladies.”

“The past couple of years I’ve been here we just haven’t meshed. I think this year everyone truly bought into what coach was selling. Underclassmen, upperclassmen, bench players, starters,” said Arizona catcher Dejah Mulipola, who homered in the 9-1 win over Ole Miss to book a ticket to Oklahoma City.

“I think we truly bought in and we worked as a unit. Our motto for this year was, ‘one team, one heartbeat,’ and it definitely showed on the field. Which is why we finally broke the curse and we’re going where we should be.”

“Trusting one another. If one of us can’t get the job done then someone else is right there behind us to pick each other up,” Denham said. “Just the confidence that the coaches showed to us and we have in the coaches.”

The newly formed bond within the Wildcats was part of the plan Candrea had. Before the season, the coach brought in a company called “The Program,” a Navy Seals training regimen. To Candrea and his staff it showcased several things about their team.

“It identified a few things for us. One is leaders. Putting that leadership positions, but I think the other thing was paying attention to details,” he said. “This group, I’ve been so pleased by watching them perform every day. And you wouldn’t notice it, but they’ve done some things that have really paid dividends for us.”

The way Arizona lined up its gloves. How the Wildcats got into formation for their warm up lines. It all contributed to the Wildcats’ 23 Women’s College World Series appearance.

“The older kids … those kids are just solid human beings,” Candrea said. “I think character at a high point in this program, and I’ve always said you looked at character probably as much as you do talent. We just happen to right now have some talented kids that are high character kids.”

The 2019 edition of the Arizona Wildcats softball team could have been individual stories. Harper being the home run queen of college softball. Senior pitcher Gina Snyder’s return home after sickness, as chronicled by Arizona Desert Swarm. Or the handful of other stories within each player on the roster. Instead they choose to “become a team” as Candrea put it. They’ll be remembered as the group that put Arizona softball back on the map and quite possibly be the squad that brings home the ninth national title back to Tucson.

The Women’s College World Series will start on Thursday. Arizona will face Pac-12 conference foe Washington in its first contest.